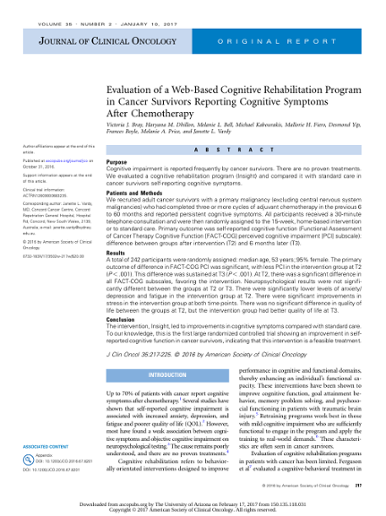 © 2016 by American Society of Clinical Oncology.

Purpose: Cognitive impairment is reported frequently by cancer survivors. There are no proven treatments. We evaluated a cognitive rehabilitation program (Insight) and compared it with standard care in cancer survivors self-reporting cognitive symptoms. Patients and Methods We recruited adult cancer survivors with a primary malignancy (excluding central nervous system malignancies) who had completed three or more cycles of adjuvant chemotherapy in the previous 6 to 60 months and reported persistent cognitive symptoms. All participants received a 30-minute telephone consultation and were then randomly assigned to the 15-week, home-based intervention or to standard care. Primary outcome was self-reported cognitive function (Functional Assessment of Cancer Therapy Cognitive Function [FACT-COG] perceived cognitive impairment [PCI] subscale): difference between groups after intervention (T2) and 6 months later (T3). Results A total of 242 participants were randomly assigned: median age, 53 years; 95% female. The primary outcome of difference in FACT-COG PCI was significant, with less PCI in the intervention group at T2 (P < . 001). This difference was sustained at T3 (P < .001). At T2, there was a significant difference in all FACT-COG subscales, favoring the intervention. Neuropsychological results were not significantly different between the groups at T2 or T3. There were significantly lower levels of anxiety/depression and fatigue in the intervention group at T2. There were significant improvements in stress in the intervention group at both time points. There was no significant difference in quality of life between the groups at T2, but the intervention group had better quality of life at T3. Conclusion The intervention, Insight, led to improvements in cognitive symptoms compared with standard care. To our knowledge, this is the first large randomized controlled trial showing an improvement in self-reported cognitive function in cancer survivors, indicating that this intervention is a feasible treatment. (C) 2016 by American Society of Clinical Oncology