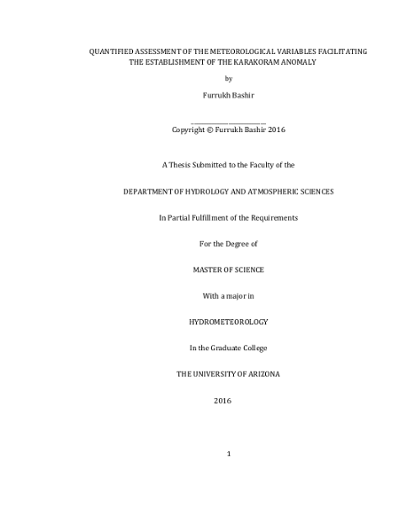 Lofty Hindukush, Karakoram and Himalayan (HKH) mountain ranges centered in the Northern Pakistan are host to some of the world’s largest glaciers outside the Polar Regions and are a source of water for drinking and irrigation to the millions of people living downstream. With the increase in the global temperatures, glaciers are reported as retreating globally. However, some of the glaciers in the Karakoram mountain ranges are reported as surging with positive mass balance, especially since the 1990s. This phenomenon is described as "The Karakoram Anomaly". Various efforts have been made to explain the state and fate of the HKH glaciers in the recent past. However, they are limited to quantification of the change in temperature, precipitation and river runoff, or through their impact on future climate projections. For the HKH region, temperature fluctuations have been out of the phase with hemispheric trends for past several centuries. Therefore, climate change in this region is not solely the temperature effect on melting as compared to other glaciated regions. To identify the reasons for the establishment of the Karakoram Anomaly, monthly mean climatic variables for last five decades, reported from meteorological observatories at the valley floors in HKH region, are analyzed. In addition to the climatic variables of temperature and precipitation, monthly mean synoptic observations reported by meteorological observatories in both morning and afternoon, along with monthly mean radiosonde data are used. From these data the role of different near-surface and upper atmospheric meteorological variables in maintaining the positive mass balance of the glaciers and the development of the Karakoram Anomaly can be explained. An overall warming in the region is observed. The trends in the summer temperatures, which were reported as decreasing a decade ago, are now found as increasing in updated time series. However, the overall gradient is still negative. The winter mean and maximum temperatures are increasing with accelerated trends. Both maximum and minimum temperatures in summer are not diverging anymore and the diurnal temperature range is decreasing in the most recent decade. The afternoon cloudiness is found as increasing throughout the year except for spring, which is indicative of an increase in convective uplifting. Moreover, humidity is increasing all over the region; due to evaporation in the spring, from monsoon moisture advection in summer, and due to the recycling of monsoon moisture in autumn. Furthermore, near-surface wind speed and net radiation in the region are decreasing, explaining the decrease in the summer minimum temperature and the presence of the cloudy skies. The decrease in near-surface wind speed, and net radiation, and increase in water vapor pressure put a limit on the evapotranspiration process. In addition, winter and summer precipitation is increasing. The aridity index, which is based on the ratio of precipitation and reference evaporation, indicates that region is turning moisture surplus and energy deficient. Surface atmospheric pressure and 700 hPa geopotential height is increasing due to warming in the bottom layers of the troposphere. Nighttime inversion in the lower tropospheric layers is decreasing due to warming. Analysis of gridded observed and reanalysis datasets indicates that they are not presenting a signal of change in accordance with the instrumental record. Furthermore, it is found that meteorological conditions during the summer season are still favorable for the sustenance of glaciers whereas more melting may occur in the spring season that may increase the early season river flows and may affect lower lying portions of the debris-free glaciers.