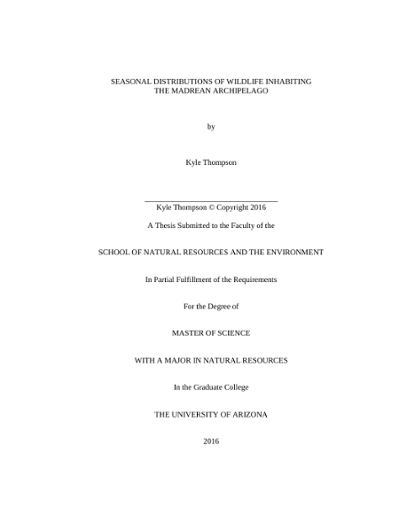 Species distributions reflect the suite of resources and range of environmental conditions required by a species. Distributions of many species change seasonally, however, in response to changes in resource availability and environmental conditions, many of which are projected to shift in response to climate change. We sought to identify environmental and anthropogenic factors associated with seasonal changes in the distribution of vertebrates that inhabit the Madrean Archipelago in southern Arizona, which is important for identifying mechanisms through which climate change may affect these species. From July 2012 to February 2015 (966 days), we used remote cameras to survey 200 sites across 16 mountain ranges for a total of 69,434 trap days and used dynamic occupancy models to determine how landscape features, vegetation composition, and anthropogenic factors influenced the distributions and seasonal rates of local colonization and extinction of 13 vertebrates. For these 13 species, we recorded 37,888 detections, with gray foxes, skunks, and squirrels detected most frequently. Bobcats, cottontails, gray foxes, skunks, squirrels, javelina, puma, and coatimundis were all detected across the entire range of elevations surveyed, from 935 to 2395 m. Black bears and wild turkeys were never detected below 1270 m, Sonoran opossums never detected above 1980 m, and coyotes and ringtails never detected above 2020 m. Composition and structure of vegetation in the understory, midstory, and overstory influenced initial occupancy of several species, including skunks, coatimundis, Sonoran opossums, and cottontails. Season, either directly or as an interaction with the estimated amount of solar radiation reaching a site, influenced local extinction rates of all 13 target species and local colonization rates of 9 of 13 species. Elevation influenced local colonization rates of black bears and coatimundis positively, and coyotes, Sonoran opossums, and cottontails negatively, and local extinction rates of skunks negatively and coyotes and black bears positively. These patterns indicate that the distributions of many species in this region change seasonally, likely as a mechanism to meet dietary, behavioral, or physiological needs in response to shifts in environmental conditions and resource availability. Therefore, species that depend on seasonal resources may be at higher risk of distributional shifts or range contractions if the distribution and phenology of these resources change in response to changes in climate.