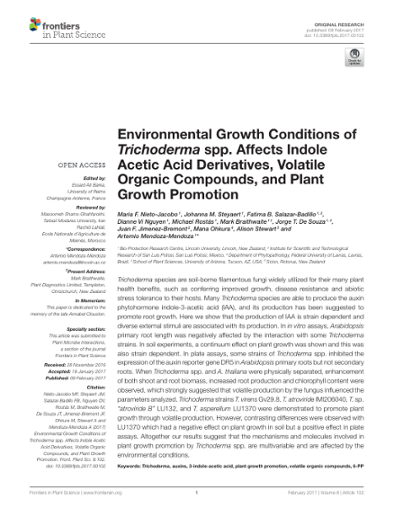 © 2017 Nieto-Jacobo, Steyaert, Salazar-Badillo, Nguyen, Rostás, Braithwaite, De Souza, Jimenez-Bremont, Ohkura, Stewart and Mendoza-Mendoza. This is an open-access article distributed under the terms of the Creative Commons Attribution License (CC BY).

Trichoderma species are soil-borne filamentous fungi widely utilized for their many plant health benefits, such as conferring improved growth, disease resistance and abiotic stress tolerance to their hosts. Many Trichoderma species are able to produce the auxin phytohormone indole-3-acetic acid (IAA), and its production has been suggested to promote root growth. Here we show that the production of IAA is strain dependent and diverse external stimuli are associated with its production. In in vitro assays, Arabidopsis primary root length was negatively affected by the interaction with some Trichoderma strains. In soil experiments, a continuum effect on plant growth was shown and this was also strain dependent. In plate assays, some strains of Trichoderma spp. inhibited the expression of the auxin reporter gene DR5 in Arabidopsis primary roots but not secondary roots. When Trichoderma spp. and A. thaliana were physically separated, enhancement of both shoot and root biomass, increased root production and chlorophyll content were observed, which strongly suggested that volatile production by the fungus influenced the parameters analyzed. Trichoderma strains T. virens Gv29.8, T. atroviride IMI206040, T. sp. "atroviride B" LU132, and T. asperellum LU1370 were demonstrated to promote plant growth through volatile production. However, contrasting differences were observed with LU1370 which had a negative effect on plant growth in soil but a positive effect in plate assays. Altogether our results suggest that the mechanisms and molecules involved in plant growth promotion by Trichoderma spp. are multivariable and are affected by the environmental conditions.