Genetic and Neuroanatomic Factors that Influence Executive Functions in Aging 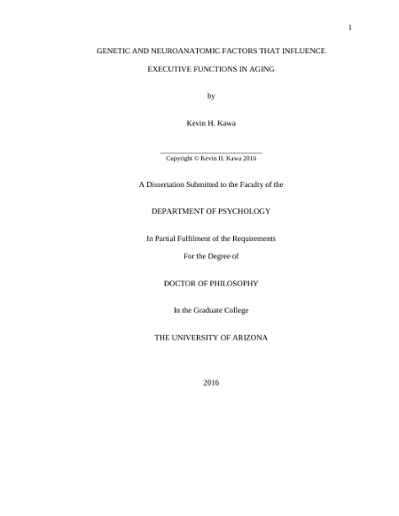 In the present set of experiments, we investigated the effects of age and COMT genotypes on traditional measures of executive functions, e.g., Wisconsin Card Sorting Test (WCST; Hart et al., 1988), a battery of executive functions based on the 3 factor model (shifting, updating, inhibition) described by Miyake et al. (2000) and developed at the University of Arizona (Alexander et al., 2012), and two fMRI tasks of executive functions (shifting, updating). The results of experiment 1 showed that COMT influenced performance on several traditional measures of executive functions, with Met homozygotes outperforming Val homozygotes. However, on the WCST we did not observe less perseverative errors in Met carriers as reported previously (Barnett, Jones, Robbins, & Muller, 2007; Bruder et al., 2005; Malhotra et al., 2002; Nagel et al., 2008). According to Miyake et al. (2000), however, such tasks as the WCST may actually involve multiple executive processes, making it difficult to tease apart the different types of executive functions being measured. Furthermore, COMT may be sensitive to some aspects of executive functions and not others. To this end, in experiment 2 we investigated associations between COMT and measures of executive functions from each of the 3 domains described in Miyake et al. (2000). According to the models proposed by Bilder et al. (2004) and Cools and D’Esposito (2011), the Val allele promotes cognitive flexibility, while the Met allele promotes cognitive stability. Contrary to what we expected, Met homozygotes actually performed better than Met/Val heterozygotes but no better than Val homozygotes on one measure of updating (flexibility). Upon closer examination of the processes involved in the updating task, however, the results may not necessarily be contradictory as the task may have required greater stability than previously thought. In the fMRI experiment, although behavioral performance was largely similar between age groups and COMT genotypes on the fMRI tasks, we observed differences in activation such that younger adults and Met homozygotes showed higher levels of activation relative to older adults and Val carriers, respectively. Our results suggest that these higher levels of activation may have been relied upon to maintain similar levels of performance. Additionally, across the 3 experiments the effects of COMT indicate that an overall Met advantage cannot be assumed. Rather, the benefits of one allele compared to the other should be investigated in terms of the specific cognitive processes involved in the task at hand. Thus, it is important for future studies to continue characterizing the unity and diversity of executive functions and investigate factors that may influence these patterns behaviorally and neurally, such as age and genetics.