The Public Good as a Campus Battleground: Activists and Administrators Defining Access to Institutions and Campus Space 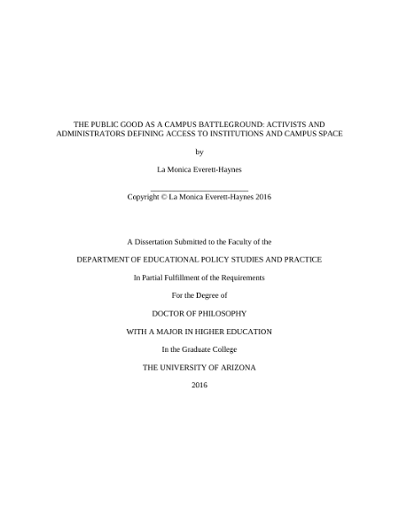 During the early part of the 21st century, a number of campus demonstrations and other protest acts on college and university campuses became highly visible nationally and internationally, largely thanks to social and traditional/popular media. This visibility was partially due to the ubiquitous and easily accessible nature of emergent digital technologies–cameras, cell phones and social networking sites, among other tools. Though campus protests and social movements began to proliferate nationally, and in the context of increased economic inequity, few studies sought to explore how campus actors (students and employees in particular) used social and popular media to shape and control public perception, specifically during highly visible campus conflicts. Further, much of the literature on campus activism has historically overlooked protests and social justice movements occurring on comprehensive state university and community college, or 2-year, campuses. Additionally, the literature does not offer a comprehensive examination of strategies surrounding pre-negotiated protest acts between campus activists, administrators and law enforcement officers. Also, the literature has not adequately examined responses to tactical strategies employed by law enforcement agencies during campus protest, and at a time of heightened militarization of officers. Both issues are related to the image-making capabilities of activists and administrators. To explore such issues, I set out to investigate how student and employee activists and also administrators construct meaning around the public good mission of higher education. I then explored how both groups public good conceptualizations to shape both action and public perception. In doing so, I employed a combined theoretical framework, modifying academic capitalism and co-cultural theories and adapting them into a single framework. My framework enabled the examination of power dynamics around interactions, discourse and space, ultimately leading to an understanding that the public good mission is a battleground. Within this frame, campus activists and administrators are struggling to both define and manifest the democratic imperative, or historic public good mandate, in different ways. The framework also allow for the study of why specific information is publicized or narrated, while other information is omitted or ignored. Using qualitative methods, I specifically studied how individuals seek to control involvement in democratic processes on campus based on definitions associated with the public good. I also studied ways individuals advance democratic ideals. Further, I explored what tools (including social media and traditional and/or popular media, also referenced collectively as "the press") individuals employ to shape public perception about equity issues and conflicts on campus. In this regard, social and popular media serve as conduits for informing public audiences. For my investigation, I purposefully selected one land-grant institution, a comprehensive state university, and one 2-year community college–all in California. I intentionally selected California, as the state has historically and continues to be seen an important forerunner for nationwide higher education policy and practice. I also chose campuses whose conflicts were receiving statewide and national media attention to allow for the investigation of public perception surrounding campus conflict. Doing so also allowed for the exploration of how those on campus employed social media strategies and also utilized popular media to attempt to shape and control the public image of their institutions. My findings suggest that while campus activists and administrators maintain a similar belief that public institutions should be broadly accessible, they differently conceptualize how the public good mission of higher education should manifest. The difference in framing of the public good complicates interactions between both groups, and at times leads to violent clashes during protest. My findings also suggest that while activists and campus officials both maintain a social media presence and interact with media representatives, administrators are not as successful in capturing public support. This appears especially true during and after clashes have occurred during campus protest acts that also involve campus law enforcement officers. Additionally, my findings indicate that the under-utilization of social media, lax media relations strategies and blame shifting, specifically during protest acts, may ultimately hurt administrators and law enforcement officers with regard to image-shaping efforts. Of note, the resulting coverage of violent clashes in the popular media tended to favor activists over administrators and law enforcement officers no matter the type and amount of pre-planning and pre-negotiations between activists and campus officials. Ultimately, my findings challenge perceptions that institutional image-making powers reside squarely with administrators and media relations offices. Given the widespread use of digital technologies and social media, and also strategies activists have employed to engage with members of traditional media outlets, my findings also illustrate how student and employee activists are changing how power is introduced and distributed within their campus communities.