Climate and Human Drivers of Forest Vulnerability in the US Southwest: Perspectives from Dendroecology 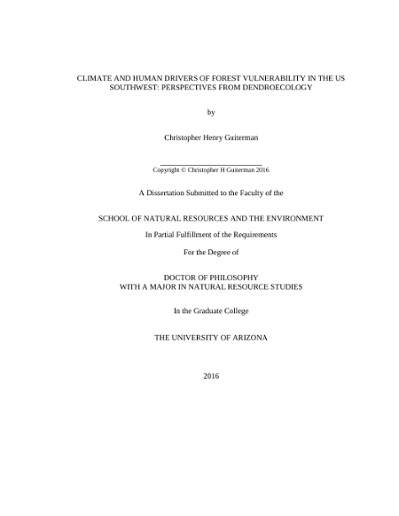 The ongoing drought in the US Southwest (SW) has led to particularly large and severe wildfires, tree die-off events, insect outbreaks, and increased forest stress levels. These disturbances underscore the vulnerabilities of SW dry conifer forests to climate change and past land-uses. Climate projections show a clear upward trend in regional temperatures, which will lead to accelerated heat-related stressors and disturbances in the coming decades. Already, more than 20% of the dry conifer forests of the SW have been severely impacted. This number is likely to grow, but we lack a clear picture of where, when, and to what degree other forest areas will be affected. Here, I apply dendroecological methods to evaluate patterns and processes that might determine greater or lesser vulnerability in dry conifer forests. Much of this work stems from critical concerns voiced by the Navajo Forestry Department (NFD). Long-term and representative data are necessary for the NFD, as they are responsible for closely managing over 250,000 hectares of forests and woodlands for the traditional products and ecosystem services that their forests provide for the Navajo people. The first study takes a multi-century perspective on changing fire regimes across Navajo forests, and places current forest structure and recent severe events in a long-term context. We found that surface fires were frequent across the landscape from at least the late-1500s until 1880. Navajo settlement of the area began to affect the fire regimes with added small fires in some areas beginning in 1700. By 1832, the rise of traditional pastoralist practices and transhumant migrations reduced fire activity in areas of greater use. Conditions changed following the establishment of the Navajo reservation in 1868, as livestock herds grew rapidly and initiated a near-synchronous and widespread collapse of fire regimes across the study area by 1880. The legacies of this change in land use are greater forest densities and higher fuel loads in some areas, raising the vulnerability of the forest to more severe fires. The second study assesses one of the most dramatic long-term consequences of recent high-severity fires in the SW, the rapid post-fire transition of dry conifer forest to oak-dominated shrubfields. To assess probable successional trajectories and interactions with climate change of recently converted forests, we reconstructed the age structures and fire regimes of some of the largest and oldest shrubfields in the Jemez Mountains of northern New Mexico. We found that shrubfields are a resilient configuration to drought and fire, historically burning at the same rates and under similar climate as dry conifer forests. Dense shrubfields pose a significant challenge to conifer recruitment from competition effects, with our sites persisting for over 100 years in the absence of burning and through periods of favorable climate to conifers. Given future warming favoring oak over pine, and projected trends in fire activity and high-severity fire behavior, we expect much more forest area to convert to shrubfield, especially in the absence of restoration efforts to reduce crown fire potential.Finally, we evaluate landscape-scale variability in tree growth response to regional climate across the Navajo forest. Projections of climate-induced forest decline often omit upper-elevation and mesic sites because they are not represented in regional tree-ring chronology networks. We found that these stands had much lower response to 20th century droughts than mid to lower elevation stands, and that targeted tree-ring sites are consistently more correlated with regional climate. However, as temperature-driven atmospheric moisture demand has remained above average since ~1997 in the study area, the upper-elevation trees are now nearly as responsive to regional climate as lower elevation xeric sites, probably due to increased moisture limitations. Recent warming has thus synchronized tree growth to an unprecedented extent across this large landscape and regionally.