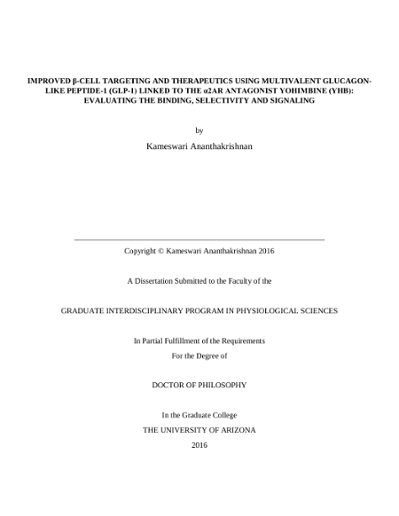 Diabetes Mellitus (DM) is a metabolic disorder in which the body fails to achieve glucose homeostasis, due to either insulin resistance or reduced insulin secretion or both. This inadequate glucose control leads to hyperglycemia which, if left unchecked, leads to secondary complications like nephropathy, neuropathy, retinal degeneration and other serious conditions. In non-disease state, normal glucose level in the blood is maintained by pancreatic β-cells, which secrete insulin. However, during diabetes development, there is loss of β-cell mass and function; resulting in decreased insulin secretion which is the ultimate cause of hyperglycemia. The ability to non-invasively monitor changes in the β-cell mass during the development or treatment of diabetes would be a significant advance in diabetes management. However, a primary limitation for analysis of β-cell mass and developing dysfunction is the lack of specificity of β-cell targeting agents. Our novel approach for achieving the required specificity for a usable β-cell targeted contrast agent is to target a set of receptors on the cell surface that, as a combination, are unique to that cell. Through genetic screening, Glucagon Like Peptide-1 Receptor (GLP-1R) and α2Adrenergic Receptor (α2AR) were chosen as a potential molecular barcode for β-cells since their combination expression is relatively unique to the β-cells. GLP-1R and α2AR are both G-protein couple receptors (GPCRs) that, apart from being a β-cell specific combination, play an important role in regulating fundamental downstream signaling pathways in β-cells. To target these receptors effectively, we synthesized a multivalent ligand composed of Yohimbine (Yhb), an α2 adrenergic receptor (α2AR) antagonist, linked to an active Glucagon-like Peptide 1 analog (GLP-1₇₋₃₆). In this manuscript, I describe the synthesis and characterization of binding selectivity and signaling ability of GLP-1/Yhb at the cellular level. Using high throughput binding assays, we observed high affinity binding of GLP-1/Yhb to βTC3 cells, a β-cell mimetic line expressing both receptors, at a Kd of ~3 nM. Using microscopy, we observed significant Cy5-tagged GLP-1/Yhb binding and rapid internalization in cells expressing the complementary receptor pair at low concentrations, as low as 1 nM and 5 nM. When one of the receptors was made inaccessible due to presence of saturating quantities of a single unlabeled monomer, GLP-1/Yhb-Cy5 failed to bind to the cells at low concentrations (<10 nM). Similarly, in cells where either GLP-1R or α2AR were knocked down (using shRNA), binding of GLP-1/Yhb was significantly reduced (≤half of cells with both receptors), indicating strong selectivity of the ligand to cells expressing the combination of receptors. We also observed that GLP-1/Yhb construct modulates downstream signaling inβ TC3 cells resulting in enhanced Glucose Stimulated Insulin Secretion (GSIS). In presence of stimulatory glucose, GLP-1/Yhb significantly potentiated GSIS with a half-maximal effective dose of 2.6 nM. Compared to GLP-1₇₋₃₆ alone or GLP-1₇₋₃₆ and Yhb monomers added together, only GLP-1/Yhb could significantly potentiate GSIS at 1 nM, demonstrating that GLP-1/Yhb could translate high affinity binding to increased efficacy for GSIS potentiation. Unlike for insulin secretion, high affinity divalent binding did not translate to increased cAMP production at low concentrations, with significant increases above baseline seen only at 10 nM and higher. Nevertheless, these data show that GLP-1/Yhb binds selectively to β-cells and affects signaling, demonstrating its potential for targeted β-cell imaging and therapy. Overall, our work indicates that synthetic heterobivalent ligands, such as GLP-1/Yhb can be developed to increase cellular specificity and sensitivity making them a strong candidate for both noninvasive imaging and targeted therapy.