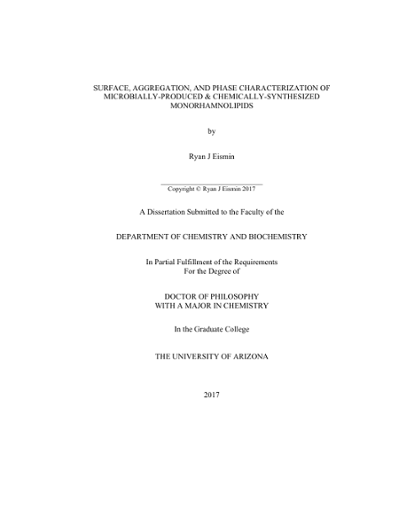 The purpose of this research has been to explore the native monorhamnolipid (mRL) mixture produced by Pseudomonas aeruginosa ATCC 9027, as well as newly- synthesized monorhamnolipid diastereomers (R,R)-Rha-C10-C10, (R,S)-Rha-C10-C10, (S,S)-Rha-C10-C10 and (S,R)-Rha-C10-C10, to understand their aggregation and phase behavior in aqueous solution. This work is in response to the consideration that biosurfactants offer a "greener" alternative to conventional surfactants. Relationships between chemical structure of the diastereomers and surface activity were studied using surface tension measurements. It was found that the critical aggregation concentration (CAC) values are lower for deprotonated (R,S)-Rha-C10-C10 and higher for protonated (R,S)-Rha-C10-C10 compared to the other diastereomers or the native mRL mixture. Furthermore, the 1:1:1:1 diastereomeric mixture has the overall lowest cross-sectional area for deprotonated rhamnolipids. Dynamic light scattering (DLS) was used to study the hydrodynamic radii (Rh) of the mRL aggregates and the four diastereomers in aqueous solution. In all five surfactants studied, each observed at pH 8.0 and 4.0, three aggregate populations were observed. For all deprotonated rhamnolipids the micelle, at a hydrodynamic radius of ~2 nm, was found to be in the highest abundance where the two lower abundant other population take on a lamellar aggregate structure. Data to support this were collected using fluorescence probing techniques. For the surfactants in the protonated state, pH 4.0, it was found that all form primarily lamellar structures, also confirmed using fluorescence probing. The average aggregation numbers (Nagg) of the micelles for the deprotonated native mRL mixture and the four diastereomers were studied using steady-state and time-resolved fluorescence quenching measurements. Somewhat unexpectedly, the Nagg values were observed to be a strong function of the rhamnolipid concentration for all systems. At low concentrations, pre-micellar aggregates with aggregation numbers too small for micelles were observed. A critical concentration is identified at which a critical aggregation number is defined; this is proposed to be the smallest fully-formed micelle in solution with values of ~25-30 molecules/micelle for the native mRL mixture and all four diastereomers. Thus, the aggregation properties of the native mRL mixture and the four diastereomers are generally similar at this critical concentration. However, the increase in aggregation number above this critical point varies for all the surfactants, where the (R,R)-Rha-C10-C10 diastereomer has the greatest increase in monomers with concentration and the (S,S) and (R,S) diastereomers have the lowest. The increased observed aggregation number is consistent with the computational work showing increased growth with concentration for the deprotonated rhamnolipid micelles. Furthermore, these computations have confirmed the ability of protonated rhamnolipids to form lamellar structures in solution. Fluorescence probing work was also used to study rhamnolipid phase behavior as a function of varying solution conditions, such as ionic strength, solution pH, surfactant concentration, and temperature. Steady-state fluorescence methods are utilized to probe the surfactant microenvironment using the polarity-sensitive dyes prodan and laurdan. By dissolving the dye within the rhamnolipid aggregates and observing their solvatochromic behavior, all surfactants studied are known to form more micellar aggregates at high pH and low surfactant concentration, whereas elongation of the micelle is observed at low pH and moderate to high surfactant concentration.