Land-Atmosphere Interactions Due to Anthropogenic and Natural Changes in the Land Surface: A Numerical Modeling 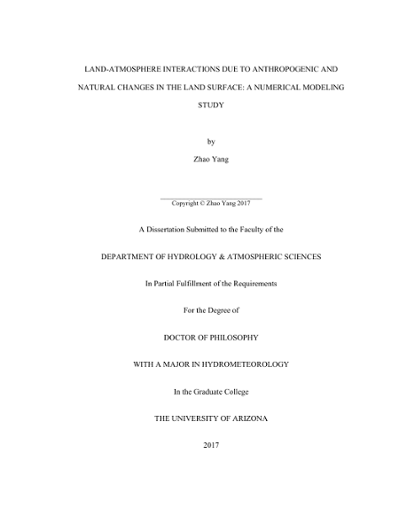 Alterations to the land surface can be attributed to both human activity and natural variability. Human activities, such as urbanization and irrigation, can change the conditions of the land surface by altering albedo, soil moisture, aerodynamic roughness length, the partitioning of net radiation into sensible and latent heat, and other surface characteristics. On the other hand, natural variability, manifested through changes in atmospheric circulation, can also induce land surface changes. These regional scale land surface changes, induced either by humans or natural variability, can effectively modify atmospheric conditions through land-atmosphere interactions. However, only in recent decades have numerical models begun to include representations of the critical processes driving changes at the land surface, and their associated effects on the overlying atmosphere. In this work we explore three mechanisms by which changes to the land surface–both anthropogenic and naturally induced–impact the overlying atmosphere and affect regional hydroclimate. The first land-atmosphere interaction mechanism explored here is land-use and land-cover change (LULCC) due to urban expansion. Such changes alter the surface albedo, heat capacity, and thermal conductivity of the surface. Consequently, the energy balance in urban regions is different from that of natural surfaces. To evaluate the changes in regional hydroclimate that could arise due to projected urbanization in the Phoenix–Tucson corridor, Arizona, my first study applied the Weather Research and Forecasting (WRF) with an Urban Canopy Model (UCM; which includes a detailed urban radiation scheme) coupled to the Noah land surface model to this region. Land-cover changes were represented using land-cover data for 2005 and projections to 2050, and historical North American Regional Reanalysis (NARR) data were used to specify the lateral boundary conditions. Results suggest that temperature changes are well defined, reflecting the urban heat island (UHI) effect within areas experiencing LULCC, whereas changes in precipitation are less certain (statistically less robust). However, the study indicates the likelihood of reductions in precipitation over the mountainous regions northeast of Phoenix and decreased evening precipitation over the newly urbanized area. The second land-atmosphere interaction mechanism explored here is irrigation which, while being an important anthropogenic factor affecting the local to regional water cycle, is not typically represented in regional climate models. In this (second) study, I incorporated an irrigation scheme into the Noah land surface scheme coupled to the WRF model. Using a newly developed water vapor tracer package (developed by Miguez-Macho et al. 2013), the study tracks the path of water vapor that evapotranspires from the irrigated regions. To assess the impact of irrigation over the California Central Valley (CCV) on the regional climate of the U.S. Southwest, I ran six simulations (for three dry and three wet years), both with and without the irrigation scheme. Incorporation of the irrigation scheme resulted in simulated surface air temperature and humidity that were closer to observations, decreased the depth of the planetary boundary layer over the CCV, and increased the convective available potential energy. The results indicated an overall increase in precipitation over the Sierra Nevada Range and the Colorado River Basin during the summer, with water vapor rising from the irrigated region moving mainly northeastward and contributing to precipitation in Nevada and Idaho. The results also indicate an increase in precipitation on the windward side of the Sierra Nevada Range and over the Colorado River Basin. The former is possibly linked to a sea-breeze type circulation near the CCV, while the latter is likely associated with a wave pattern related to latent heat release over the moisture transport belt. In the third study, I investigated the role of large-scale and local-scale processes associated with heat waves using the Modern Era-Retrospective Analysis for Research and Applications (MERRA) reanalysis, and evaluate the performance of the regional climate model ensemble used in the North America Regional Climate Change Program (NARCCAP) in reproducing these processes. The Continental US is divided into different climate divisions (following the convention of the National Climate Assessment) to investigate different mechanisms associated with heat waves. At the large scale, warm air advection from terrestrial sources is a driving factor for heat waves in the Northeast and Midwest. Over the western United States, reduced maritime cool air advection results in local warming. At the local scale, an antecedent precipitation deficit leads to the continuous drying of soil moisture, more energy being partitioned into sensible heat flux and acting to warm surface air temperatures, especially over the Great Plains. My analysis indicates that the NARCCAP simulated large-scale meteorological patterns and temporal evolution of antecedent local-scale terrestrial conditions are very similar to those of MERRA. However, NARCCAP overestimates the magnitude and underestimates the frequency of Northeastern and Midwestern US heat waves, partially due to anomalous heat advection through large-scale forcing. Overall, the aforementioned studies show that utilization of new parameterizations in land surface models, such as the urban canopy scheme and the irrigation scheme, allow us to understand the detailed physical mechanisms by which anthropogenic changes in the land surface can affect regional hydroclimate, and may thus help with informed decision making and climate adaptation/mitigation. In addition to anthropogenic changes of the land surface, humans are of course affecting the overlying atmosphere. Currently, NARCCAP is the best available tool we have to help us understand the effects of changes greenhouse gas induced climate change at the regional scale. The regional climate models participating in NARCCAP are able to realistically represent the dominant processes associated with heat waves, including the atmospheric circulation changes and the land-atmosphere interactions that drive heat waves. This lends credibility, when analyzing the projections of these models with increased GHG emissions, to the assessment of changes in heat waves under a future climate.