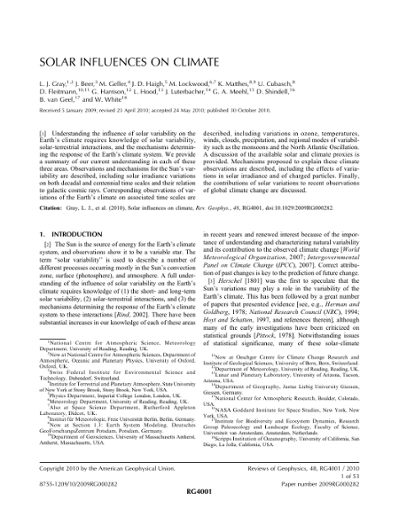 Copyright 2010 by the American Geophysical Union.

Understanding the influence of solar variability on the Earth's climate requires knowledge of solar variability, solar-terrestrial interactions, and the mechanisms determining the response of the Earth's climate system. We provide a summary of our current understanding in each of these three areas. Observations and mechanisms for the Sun's variability are described, including solar irradiance variations on both decadal and centennial time scales and their relation to galactic cosmic rays. Corresponding observations of variations of the Earth's climate on associated time scales are described, including variations in ozone, temperatures, winds, clouds, precipitation, and regional modes of variability such as the monsoons and the North Atlantic Oscillation. A discussion of the available solar and climate proxies is provided. Mechanisms proposed to explain these climate observations are described, including the effects of variations in solar irradiance and of charged particles. Finally, the contributions of solar variations to recent observations of global climate change are discussed.

The development of this review article has evolved from work carried out by an international team of the International Space Science Institute (ISSI), Bern, Switzerland, and from work carried out under the auspices of Scientific Committee on Solar Terrestrial Physics (SCOSTEP) Climate and Weather of the Sun‐Earth System (CAWSES‐1). The support of ISSI in providing workshop and meeting facilities is acknowledged, especially support from Y. Calisesi and V. Manno. SCOSTEP is acknowledged for kindly providing financial assistance to allow the paper to be published under an open access policy. L.J.G. was supported by the UK Natural Environment Research Council (NERC) through their National Centre for Atmospheric Research (NCAS) Climate program. K.M. was supported by a Marie Curie International Outgoing Fellowship within the 6th European Community Framework Programme. J.L. acknowledges support by the EU/FP7 program Assessing Climate Impacts on the Quantity and Quality of Water (ACQWA, 212250) and from the DFG Project Precipitation in the Past Millennium in Europe (PRIME) within the Priority Program INTERDYNAMIK. L.H. acknowledges support from the U.S. NASA Living With a Star program. G.M. acknowledges support from the Office of Science (BER), U.S. Department of Energy, Cooperative Agreement DE‐FC02‐97ER62402, and the National Science Foundation. We also wish to thank Karin Labitzke and Markus Kunze for supplying an updated Figure 13, Andrew Heaps for technical support, and Paul Dickinson for editorial support. Part of the research was carried out under the SPP CAWSES funded by GFG. J.B. was financially supported by NCCR Climate–Swiss Climate Research.