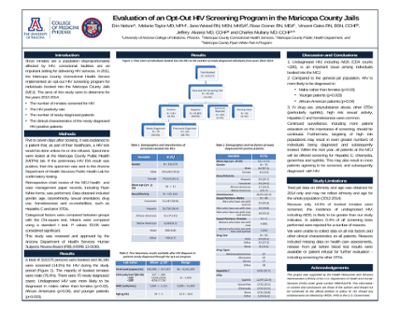 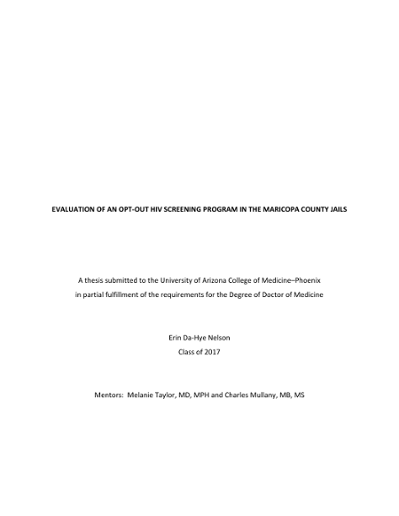 This item is part of the College of Medicine - Phoenix Scholarly Projects 2017 collection. For more information, contact the Phoenix Biomedical Campus Library at pbc-library@email.arizona.edu.

Since inmates are a population disproportionately affected by HIV, correctional settings are important sites for delivering HIV services. The Maricopa county (Phoenix Area) jail system is the 4th largest in the nation. In 2011, the Maricopa County Correctional Health Service implemented an opt‐out HIV screening program for individuals booked into the Maricopa County Jails (MCJ). The aims of this study were to determine for the years 2012‐2014: • The number of inmates screened for HIV • The HIV positivity rate • The number of newly diagnosed patients • The clinical characteristics of the newly diagnosed HIV positive patients Five to seven days after booking, inmates are offered HIV screening. These laboratory records were used to determine the number of inmates tested and positivity. Prior history of previous HIV diagnosis was obtained from Maricopa public health records. Retrospective chart review of the MCJ health and case management records, including Ryan White forms, was performed to gather gender, age, race/ethnicity, sexual orientation, drug use, homelessness and co‐morbidities of newly HIV‐infected persons, such as Hepatitis C and prior STDs. Categorical factors were compared between groups with the Chi‐square test. Means were compared using a standard t test. P values ≤0.05 were considered significant. A total of 319,575 persons were booked and 46,346 were screened (14.5%) for HIV during the study period. The majority of booked inmates were male (76.9%) and Caucasian (50.8%). The mean age of inmates was 36 years. There were 70 newly HIV‐diagnosed patients. Chi squared and t tests comparing newly diagnosed individuals to the general jail population revealed statistical significance for male gender (p=0.02), African American race (p=0.04), and age (p=0.003). Undiagnosed HIV, including AIDS (CD4 counts <200), is an important issue among individuals booked into the MCJ. Compared to the general jail population, HIV is more likely to be diagnosed in males rather than females, younger patients, and African‐American patients. Additionally, IV drug use, polysubstance abuse, other STDs (particularly syphilis), high risk sexual activity, Hepatitis C and homelessness were common among HIV positive patients. Surveillance should be continued and include more patient education on the importance of screening. Furthermore, targeting high‐risk populations may result in even greater numbers of individuals being diagnosed and treated. Within the next year, all patients at the MCJ will also be offered screening for Hepatitis C, chlamydia, gonorrhea and syphilis. This may also result in more patients agreeing to be screened, and subsequently diagnosed with HIV.