High-precision radiocarbon dating of political collapse and dynastic origins at the Maya site of Ceibal, Guatemala 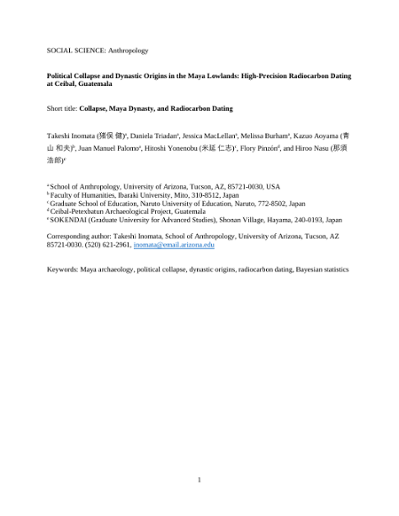 School of Anthropology, University of Arizona

High-precision radiocarbon dating of political collapse and dynastic origins at the Maya site of Ceibal, Guatemala 2017, 114 (6):1293 Proceedings of the National Academy of Sciences

Proceedings of the National Academy of Sciences

Copyright © 2016 The Authors. Published by National Academy of Sciences.

The lowland Maya site of Ceibal, Guatemala, had a long history of occupation, spanning from the Middle Preclassic Period through the Terminal Classic (1000 BC to AD 950). The Ceibal-Petexbatun Archaeological Project has been conducting archaeological investigations at this site since 2005 and has obtained 154 radiocarbon dates, which represent the largest collection of radiocarbon assays from a single Maya site. The Bayesian analysis of these dates, combined with a detailed study of ceramics, allowed us to develop a high-precision chronology for Ceibal. Through this chronology, we traced the trajectories of the Preclassic collapse around AD 150–300 and the Classic collapse around AD 800–950, revealing similar patterns in the two cases. Social instability started with the intensification of warfare around 75 BC and AD 735, respectively, followed by the fall of multiple centers across the Maya lowlands around AD 150 and 810. The population of Ceibal persisted for some time in both cases, but the center eventually experienced major decline around AD 300 and 900. Despite these similarities in their diachronic trajectories, the outcomes of these collapses were different, with the former associated with the development of dynasties centered on divine rulership and the latter leading to their downfalls. The Ceibal dynasty emerged during the period of low population after the Preclassic collapse, suggesting that this dynasty was placed under the influence from, or by the direct intervention of, an external power.

No embargo; published online before print on January 23, 2017