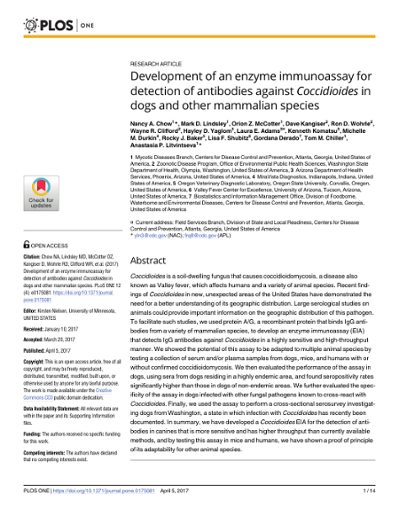 Development of an enzyme immunoassay for detection of antibodies against Coccidioides in dogs and other mammalian species 2017, 12 (4):e0175081 PLOS ONE

Copyright: This is an open access article, free of all copyright, and may be freely reproduced, distributed, transmitted, modified, built upon, or otherwise used by anyone for any lawful purpose. The work is made available under the Creative Commons CC0 public domain dedication.

Coccidioides is a soil-dwelling fungus that causes coccidioidomycosis, a disease also known as Valley fever, which affects humans and a variety of animal species. Recent findings of Coccidioides in new, unexpected areas of the United States have demonstrated the need for a better understanding of its geographic distribution. Large serological studies on animals could provide important information on the geographic distribution of this pathogen. To facilitate such studies, we used protein A/G, a recombinant protein that binds IgG antibodies from a variety of mammalian species, to develop an enzyme immunoassay (EIA) that detects IgG antibodies against Coccidioides in a highly sensitive and high-throughput manner. We showed the potential of this assay to be adapted to multiple animal species by testing a collection of serum and/or plasma samples from dogs, mice, and humans with or without confirmed coccidioidomycosis. We then evaluated the performance of the assay in dogs, using sera from dogs residing in a highly endemic area, and found seropositivity rates significantly higher than those in dogs of non-endemic areas. We further evaluated the specificity of the assay in dogs infected with other fungal pathogens known to cross-react with Coccidioides. Finally, we used the assay to perform a cross-sectional serosurvey investigating dogs from Washington, a state in which infection with Coccidioides has recently been documented. In summary, we have developed a Coccidioides EIA for the detection of antibodies in canines that is more sensitive and has higher throughput than currently available methods, and by testing this assay in mice and humans, we have shown a proof of principle of its adaptability for other animal species.