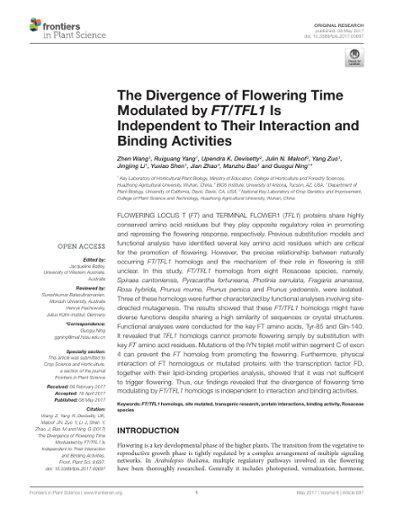 The Divergence of Flowering Time Modulated by FT/TFL1 Is Independent to Their Interaction and Binding Activities 2017, 8 Frontiers in Plant Science

© 2017 Wang, Yang, Devisetty, Maloof, Zuo, Li, Shen, Zhao, Bao and Ning. This is an open-access article distributed under the terms of the Creative Commons Attribution License (CC BY).

FLOWERING LOCUS T (FT) and TERMINAL FLOWER1 (TFL1) proteins share highly conserved amino acid residues but they play opposite regulatory roles in promoting and repressing the flowering response, respectively. Previous substitution models and functional analysis have identified several key amino acid residues which are critical for the promotion of flowering. However, the precise relationship between naturally occurring FT/TFL1 homologs and the mechanism of their role in flowering is still unclear. In this study, FT/TFL1 homologs from eight Rosaceae species, namely, Spiraea cantoniensis, Pyracantha fortuneana, Photinia serrulata, Fragaria ananassa, Rosa hybrida, Prunus mume, Prunus persica and Prunus yedoensis, were isolated. Three of these homologs were further characterized by functional analyses involving site-directed mutagenesis. The results showed that these FT/TFL1 homologs might have diverse functions despite sharing a high similarity of sequences or crystal structures. Functional analyses were conducted for the key FT amino acids, Tyr-85 and Gln-140. It revealed that TFL1 homologs cannot promote flowering simply by substitution with key FT amino acid residues. Mutations of the IYN triplet motif within segment C of exon 4 can prevent the FT homolog from promoting the flowering. Furthermore, physical interaction of FT homologous or mutated proteins with the transcription factor FD, together with their lipid-binding properties analysis, showed that it was not sufficient to trigger flowering. Thus, our findings revealed that the divergence of flowering time modulating by FT/TFL1 homologs is independent to interaction and binding activities.