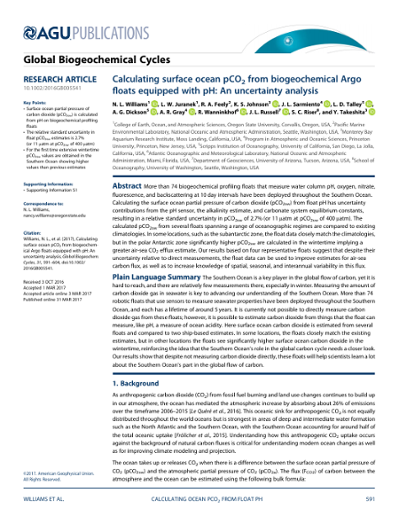 More than 74 biogeochemical profiling floats that measure water column pH, oxygen, nitrate, fluorescence, and backscattering at 10 day intervals have been deployed throughout the Southern Ocean. Calculating the surface ocean partial pressure of carbon dioxide (pCO(2sw)) from float pH has uncertainty contributions from the pH sensor, the alkalinity estimate, and carbonate system equilibrium constants, resulting in a relative standard uncertainty in pCO(2sw) of 2.7% (or 11 mu atm at pCO(2sw) of 400 mu atm). The calculated pCO(2sw) from several floats spanning a range of oceanographic regimes are compared to existing climatologies. In some locations, such as the subantarctic zone, the float data closely match the climatologies, but in the polar Antarctic zone significantly higher pCO(2sw) are calculated in the wintertime implying a greater air-sea CO2 efflux estimate. Our results based on four representative floats suggest that despite their uncertainty relative to direct measurements, the float data can be used to improve estimates for air-sea carbon flux, as well as to increase knowledge of spatial, seasonal, and interannual variability in this flux. Plain Language Summary The Southern Ocean is a key player in the global flow of carbon, yet it is hard to reach, and there are relatively few measurements there, especially in winter. Measuring the amount of carbon dioxide gas in seawater is key to advancing our understanding of the Southern Ocean. More than 74 robotic floats that use sensors to measure seawater properties have been deployed throughout the Southern Ocean, and each has a lifetime of around 5 years. It is currently not possible to directly measure carbon dioxide gas from these floats; however, it is possible to estimate carbon dioxide from things that the float can measure, like pH, a measure of ocean acidity. Here surface ocean carbon dioxide is estimated from several floats and compared to two ship-based estimates. In some locations, the floats closely match the existing estimates, but in other locations the floats see significantly higher surface ocean carbon dioxide in the wintertime, reinforcing the idea that the Southern Ocean's role in the global carbon cycle needs a closer look. Our results show that despite not measuring carbon dioxide directly, these floats will help scientists learn a lot about the Southern Ocean's part in the global flow of carbon.