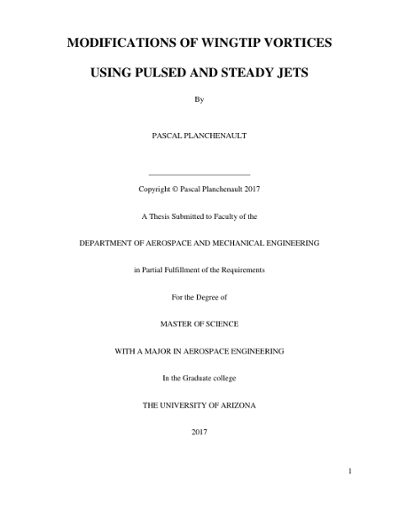 Wingtip vortices, created as a byproduct of lift, are both a hazard and a significant limiting factor in the increase of air traffic. In order to reduce separation distances between airplanes and increase safety, active flow control solutions are considered, however, more research is required to better understand the behavior of wingtip vortices. Therefore, this research focuses on the modification of the flow structure downstream using pulsed jets, visualization of the behavior of wingtip vortices using two dimensional particle image velocimetry, as well as measurements of the forces and moments affected by the pulsed jets using an aerodynamic balance. A NACA 0012 wing model equipped with two slots was mounted in a wind tunnel at approximately 150,000 Reynolds number. A valve system was designed to create jets of air at the wing tip in a steady or pulsed pattern from a slot placed either on the pressure side or the suction side. Particle image velocimetry measurements were taken at various distances downstream, and post-processed for the characterization of the vortex : position, angle, distance, vorticity contour, and circulation. Results indicate that the vortex can be forced into a cyclic pattern constrained between the baseline (no jet) vortex core position, and the position when the jet is permanently activated (steady blowing cases). Depending on the slot used, the vortex trajectory can be forced into an inclination angle. Steady blowing cases show near-sinusoidal oscillations, while pulsed blowing cases exhibit a steady rise in angle, with a slight oscillating pattern in displacement distance values. The circulation values are significantly changed, with a significantly higher dispersion than for the baseline case. Furthermore, the vortex core size is consistently larger as it is displaced away from the baseline case. Additionally, lift, drag and pitching moment were measured in a wind tunnel using an aerodynamic balance. Results showed that lift/drag coefficients consistent with published results, and that activating the jets on the pressure or suction side decreased lift. As instability grows, the destruction of the wingtip vortices occurs past the maximum downstream distance studied, therefore, additional PIV measurements should be taken further downstream. Moreover, supplementary PIV measurements at the slot themselves should be considered to better understand how the perturbed flow structure interacts with the pulsed jets.