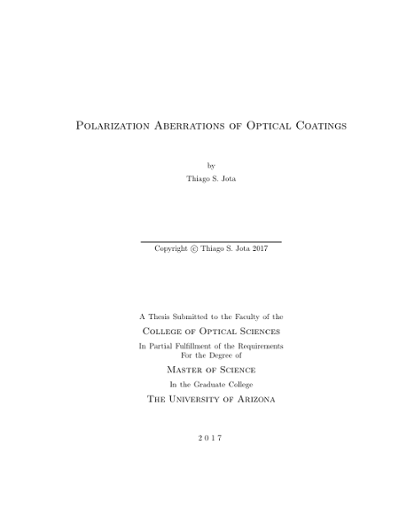 This work does not limit itself to its title and touches on a number of related topics beyond it. Starting with the title, Polarization Aberrations of Optical Coatings, the immediate question that comes to mind is: what coatings? All coatings? Not all coatings, but just enough that a third person could take this information and apply it anywhere: to all coatings. The computational work-flow required to break-down the aberrations caused by polarizing events (3D vector forms of reflection and refraction) in dielectric and absorbing materials and for thick and thin films is presented. Therefore, it is completely general and of interest to the wide optics community. The example system is a Ritchey-Chrétien telescope. It looks very similar to a Cassegrain, but it is not. It has hyperbolic surfaces, which allows for more optical aberration corrections. A few modern systems that use this configuration are the Hubble Space Telescope and the Keck telescopes. This particular system is a follow-up on this publication, where an example Cassegrain with aluminum coatings is characterized, and I was asked to simply evaluate it at another wavelength. To my surprise, I found a number of issues which lead me to write a completely new, one-of-its-kind 3D polarization ray-tracing code. It can do purely geometrical ray-tracing with add-on the polarization analysis capability, and more importantly: it keeps your data at your fingertips while offering all the outstanding facilities of Mathematica. The ray-tracing code and its extensive library, which can do several advanced computations, is documented in the appendix. The coatings of the Ritchey-Chrétien induce a number of aberrations, primarily, but not limited to: tilt, defocus, astigmatism, and coma. I found those forms to exist in both aluminum and with a reflectance-enhancing dielectric quarter-wave multilayer coating over aluminum. The thickness of the film stack varies as function of position to present a quarter-wave of optical thickness to oblique rays. Most commercial optical software that I know cannot compute this. And the results are impressive: the scalar transmission, which is a measure of ray efficiency, was raised from 78% to 95%. This means that only 5% of the incident light is lost, assuming ideal coating interfaces. This is very advantageous, considering the application: coronagraphs for exoplanet detection. Exoplanets are very far away, and therefore efficient use of light is essential. I also created a ray! I call it Huygens' twin ray. It is credited to Christiaan Huygens, who postulated that points on a wavefront can be considered as a sources of secondary spherical wavelets. This concept normally belongs to physical optics. The twin ray is emitted from the exact same object point but traced in a slightly different direction, which can be assumed by invoking Huygens's principle, and defined in a special way that consistently prevents vignetting. This requires high-precision ray-tracing, which is introduced along with this thesis work as part of the appendix. The application of this concept is exemplified in finding the exit pupil of the Ritchey-Chrétien telescope. It can be modified to work in a plurality of cases and find the precise image location in three-dimensions, making it completely general and useful. Mastering the ray-tracing documented here depends on how much optics the user knows, but tracing a single ray is something that can be learned in minutes. I welcome you to freely use it and make it your own. If your goal is to learn to ray-trace in Mathematica, the reader is directed to the appendix, especially to the four-port polarimeter example, as it is a 3D system that contains both reflection and refraction through thin films, thick films, retarders, and a single surface is traced at a time!