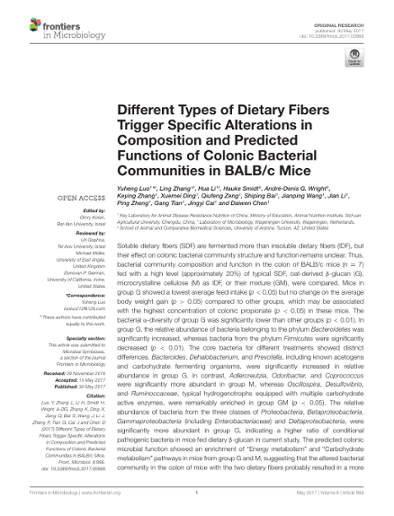 Soluble dietary fibers (SDF) are fermented more than insoluble dietary fibers (IDF), but their effect on colonic bacterial community structure and function remains unclear. Thus, bacterial community composition and function in the colon of BALB/c mice (n = 7) fed with a high level (approximately 20%) of typical SDF, oat-derived beta-glucan (G), microcrystalline cellulose (M) as IDF, or their mixture (GM), were compared. Mice in group G showed a lowest average feed intake (p < 0.05) but no change on the average body weight gain (p > 0.05) compared to other groups, which may be associated with the highest concentration of colonic propionate (p < 0.05) in these mice. The bacterial alpha-diversity of group G was significantly lower than other groups (p < 0.01). In group G, the relative abundance of bacteria belonging to the phylum Bacteroidetes was significantly increased, whereas bacteria from the phylum Firmicutes were significantly decreased (p < 0.01). The core bacteria for different treatments showed distinct differences. Bacteroides, Dehalobacterium, and Prevotella, including known acetogens and carbohydrate fermenting organisms, were significantly increased in relative abundance in group G. In contrast, Adlercreutzia, Odoribacter, and Coprococcus were significantly more abundant in group M, whereas Oscillospira, Desulfovibrio, and Ruminoccaceae, typical hydrogenotrophs equipped with multiple carbohydrate active enzymes, were remarkably enriched in group GM (p < 0.05). The relative abundance of bacteria from the three classes of Proteobacteria, Betaproteobacteria, Gammaproteobacteria (including Enterobacteriaceae) and Deltaproteobacteria, were significantly more abundant in group G, indicating a higher ratio of conditional pathogenic bacteria in mice fed dietary beta-glucan in current study. The predicted colonic microbial function showed an enrichment of "Energy metabolism" and "Carbohydrate metabolism" pathways in mice from group G and M, suggesting that the altered bacterial community in the colon of mice with the two dietary fibers probably resulted in a more efficient degradation of dietary polysaccharides. Our result suggests that the influence of dietary beta-glucan (SDF) on colonic bacterial community of mice was more extensively than MCC (IDF). Co-supplementation of the two fibers may help to increase the bacterial diversity and reduce the conditional pathogens in the colon of mice.