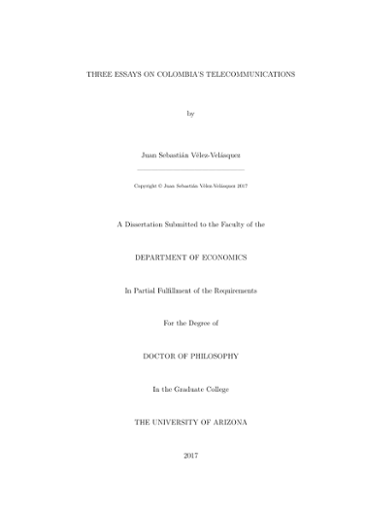 Colombia's telecommunication industry has changed drastically in the last decade. Among the most salient events, a series of mergers between some of the industry's largest providers which resulted in a reduced number of competitors. One would expect that this reduction in the number of competitors would translate into higher prices. However, competition is at such high level that the media even talk about a "price war". My dissertation aims to shed light on the causes of this apparent inconsistency between a smaller number of competitors and more competitive outcomes. I start by showing that, in effect, the latest of these mergers, the one between Comcel and Telmex, had a pro-competitive effects on the provision of broadband. Next I show that the services provided by Comcel and Telmex were complements and that the pro-competitive effects of the merger can be explained by this complementarity. Finally, I study the effects of price discrimination under oligopolistic competition. In chapter 1 I assess the ex-post short-run effect on broadband provision of the Comcel-Telmex merger. Employing administrative data about the universe of plans and firms providing wired telecom services, I use several difference-in-difference specifications to obtain estimates for the effect of the merger on price and download speeds of plans provided by the merging firm and its rivals. My estimates suggest that, in markets affected by the merger, download speeds rose by .6 Megabits per second on average. The average increase in the markets resulted from increases in the plans offered by the merging firm (1.2 Mbps) and increases in the speeds of plans provided by its rivals (.5 Mbps). In chapter 2 I study mergers of firms producing complementary goods. Mergers of firms producing complementary products have ambiguous effects on consumer welfare. The merged firm may lower prices because the merger internalizes the profits originated by the complementarity. But with the merger the firm gains the ability to bundle and with bundles the firm can exert price discrimination, increasing the prices of standalone products. I employ a comprehensive, administrative data set, which records prices, market shares, and plan attributes of the universe of Colombia’s telecom carriers, to assess which effect dominates. I estimate a random-coefficient discrete choice model of consumer demand model for bundled and standalone telecom products, in which the degree of substitutability or complementarity among products is an essential parameter of interest. I find that major telecom products display a mix of substitutability and complementarity, but in general hardwired and mobile services are perceived as complements by Colombian households. My counterfactual experiments using the estimated model, indicate positive net effects of mergers with complements: despite a small increase in the price of standalone goods, consumer surplus increases by around 7 million dollars per quarter. Finally, in chapter 3, I study price discrimination in an oligopolistic setting. Economic theory is not conclusive about the effects of banning third degree price discrimination under imperfect competition. Price discrimination can enhance competition if the firms practicing don't agree on the ranking of their markets. In this case, price discrimination can lead to lower prices in all markets. Thus, forcing the firms to charge uniform prices can increase their profits and reduce consumers' surplus. Using data on prices, market shares and characteristics of telecommunication services sold under price discrimination by Colombian telecom providers, I estimate a model of competition. The estimates allow me to simulate a counterfactual scenario in which firms lose their ability to exert price discrimination within a city. Simulating a ban on price discrimination has negligible effect on consumer surplus and increases profits slightly.