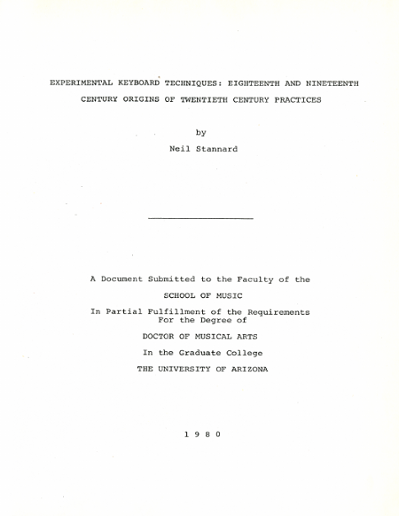 Twentieth century composers of music for the piano often make use of certain unusual effects that probably had not occurred to the instrument's builders. From its origins in the early eighteenth century to the present day the modo ordinario of piano technique remains similar to that of its keyboard relatives, the clavichord and harpsichord. Fingers on the keys and one key per finger are the norm. Had Cristofori, Silbermann, Stein, and other early instrument builders realized the latent possibilities of their instruments, it is difficult to imagine how the course of music history might have been altered. As it is, however, "new instrumental resources --most notably, a great variety of timbres plucked, scraped, strummed, and scratched out of the insides of the piano " were left to be discovered by twentieth century composers, or were they? Charles Ives, Henry Cowell, and John Cage are three experimentalists of this century to whom credit is given for having invented certain of these "new instrumental resources." Depending upon which authority one consults, either Ives Cowell receives credit for the tone cluster. Plucking (pizzicato), strumming, tremolo, stopped- string harmonics- - all achieved by reaching inside the instrument- -are credited to Cowell, as are sympathetic vibration harmonics. It is said that Cage invented the prepared piano, although he himself considers it to be an extension of Cowell's placing of objects directly on the piano strings. Since there exist musical works dàting from the early eighteenth and nineteenth centuries which make use of all of these effects--albeit, some in embryo-- it would be more accurate to say that Ives, Cowell, and Cage reinvented them and exploited their possibilities during a time in which musical conventions in general were under attack. It is not possible to point to the early works as trend-setting; nor can one trace a direct line of influence from the eighteenth century through the nineteenth century to Ives and Cowell. It is possible to say, however, that "nothing is wholly new. Each thing, however new it appears, had many antecedents." The purpose here, then, is to point to some of these antecedents and trace influences where possible, particularly in the twentieth century.