Anthropogenic Change, Effects on Bee Populations, and Consequences for a Sub-Alpine Plant Community 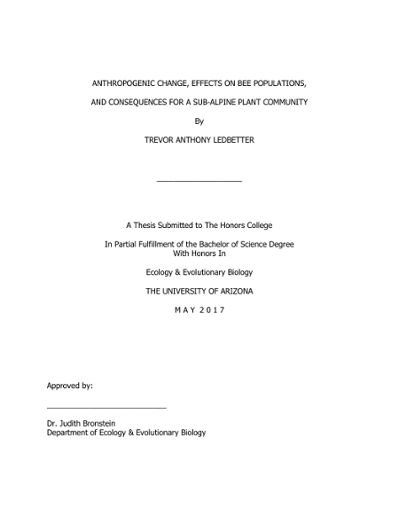 Declines in pollinator populations due to anthropogenic influences have been well documented in recent years. However, the effects that these declines have had on floral visitors that utilize floral resources in exploitative manners have received little to no attention. Not all floral visitors are pollinators. Some rob nectar, which may impose fitness effects that range from negative to positive. Some plant-pollinator systems have seen dramatic declines not only in pollinators, but in nectar robbers, in recent years. What are the consequences to plants of these declines? I studied consequences of such a decline in Aquilegia caerulea, the Colorado Columbine. During the 1970s, the floral visitor community and nectar robbing rate of A. caerulea were documented by Miller (1978). Bombus occidentalis, the Western Bumblebee, acted at that time as both the major floral visitor and an active nectar robber. In the subsequent 45 years, many studies have reported declines in B. occidentalis, earning it an IUCN Vulnerable Red List classification. Building from this information, I quantified fitness effects of nectar robbing as well as differences in the floral visitor community to A. caerulea compared to past studies. I determined the effects and consequences of these changes, particularly in relation to nectar robbing, on the floral community. I also quantified the presence and ability of flies (Diptera), whose abundance has recently been exceptionally high, to act as pollinators in the absence of effective pollinators (bumble bees). I found that the floral visitor community has changed drastically since the studies of Miller (1978). Bombus occidentalis was nearly absent from the system in 2016, resulting in severely reduced nectar robbing rates. Nectar robbing was found to have no significant effect on fruit set, while Diptera floral visitors, which dominated the system in 2016, significantly reduced fruit set below the self-pollination rate for the flower in the absence of bumble bees. As a whole, the absence of a nectar robber for this system is insignificant as nectar robbing has no influence on the reproductive success of the plant, however, in the absence of all bumble bees, Diptera, now a primary floral visitor, does have a significant, negative influence on reproductive success.