Impact of Sex and Rehydrating Fluid on Parameters of Dehydration, Rehydration, and Athletic Performance 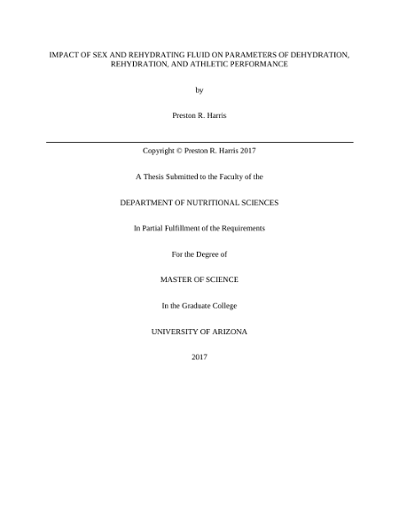 Background: In humans, total body water volume and osmolality are tightly regulated by various homeostatic mechanisms, triggered by deviations in osmolality. Heat and exercise are two stressors, which in combination can cause dehydration, and an increase in fluid osmolality, contributing to health detriments, as well as deficits in aerobic exercise performance. However, it is unclear whether dehydration affects muscular strength. Deep-ocean mineral water has been shown to have benefits on various physiological and pathophysiological conditions, including aerobic performance and muscle strength. Objectives: The aims of this study were to examine any sex differences that may exist in response to dehydration of 3% of body mass, rehydration with various fluids, and the consequences of dehydration and rehydration on muscle power and hydration status. Design: We used a counterbalanced, crossover study design, in which subjects (n=17, 9 males vs 8 females) performed a dehydrating exercise protocol until achieving a 3% body mass loss, and then rehydrated with either deep-ocean mineral water (Deep), mountain spring water (Spring), or a carbohydrate-based sports drink (Sports). Subjects completed the protocol three times, with each subject receiving the rehydrating fluid in a different order to control for order effects. Saliva samples were collected throughout the protocol to measure osmolality, and muscle strength was measured by peak torque leg extension at baseline, post-exercise, and post-rehydration. Results: We found no differences between men and women in baseline or peak salivary osmolality, or in the exercise-induced increase in osmolality. Male subjects took less time to reach 3% body mass loss than females, and females demonstrated lower sweat rates than males. Salivary osmolality returned to baseline after rehydration, with the Deep group exhibiting a significantly more rapid return to baseline, for both sexes, compared to Sports and Spring. Males generated greater peak torque extension than females at baseline, while both males and females displayed a similar significant deficit in this measure following dehydration. Peak torque recovery post-rehydration was significantly affected by fluid designation and sex, and a significant difference was seen between the Deep and the Sports groups in females. Conclusions: Males reached 3% body mass loss faster than females, while dehydration resulted in increased salivary osmolality and muscle strength deficits similarly for males and females. Deep-ocean mineral water had a significant beneficial effect on hydration recovery, for both males and females, compared to the other fluids. Recovery of muscle strength after rehydration was affected by fluid and sex, with the main driver being females.