Sleep to Feel Better: An Investigation of the Role of Sleep in the Internalizing Symptoms of Youth with Type 1 Diabetes Mellitus 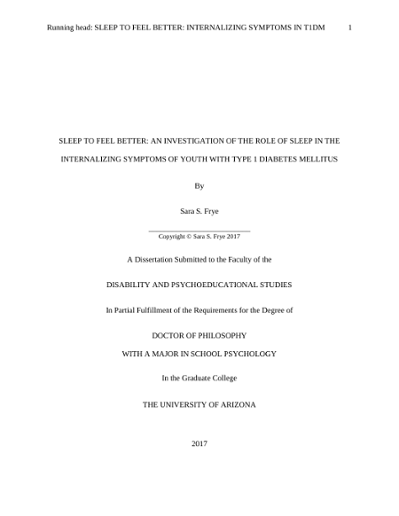 Background and Objective: Type 1 diabetes mellitus (T1DM) is one of the most common pediatric chronic illnesses. Youth with T1DM have been shown to be at risk for internalizing problems and obtaining insufficient sleep. An emerging body of literature has demonstrated the feasibility and potential benefit of increasing sleep duration as a strategy to improve psychological outcomes in nondiabetic school age populations. The current study seeks to investigate the relationship between sleep and internalizing symptoms and empirically examine the effect of a sleep extension intervention on internalizing symptoms in youth with T1DM. Methods: The sample consisted of 106 youth with T1DM (mean age = 13.5 ± 2.1 years) who were part of a larger study recruited over a three-year period. Participants were 52.8% male and 50.9% identified as non-white. The primary outcome measure was the Behavior Assessment System for Children, Second Edition (BASC-2), both parent and self-report. Other behavioral and sleep measures included actigraphy, sleep diary, the School Sleep Habits Survey (SSHS), Pediatric Symptoms Checklist (PSC), and the Child Sleep Habits Questionnaire (CSHQ). Participants were randomly assigned to either the Sleep Extension condition (n = 50), in which they were asked to extend their sleep duration, or the Fixed Sleep Duration condition (n = 56), in which they were asked to maintain the same amount of sleep as their baseline. Results: Average sleep durations varied across measures, with all values falling in the lower range or below national recommendations. More than a third (34.5%) of the sample had elevated scores for internalizing problems based on parent report, and 17.7% were elevated based on self-report. Pearson correlations indicated that parent reported sleep duration was negatively related to self-reported anxiety, r(106) = -0.237, p = 0.018, as well as parent-reported depression, r(106) = -0.218, p = 0.028, and emotional self-control, r(106) = -0.232, p = 0.018. No other measure of sleep duration was significantly correlated with internalizing symptoms. Secondary analyses of measures of sleep quality including sleep efficiency (SE), wake after sleep onset (WASO), and sleepiness, were significantly related to internalizing problems based on both parent and self-report (all p < 0.05), whereas more variability in sleep duration (CV) was related to higher self-reported depression, r(106) = 0.210, p = 0.033. Following the sleep intervention, participants in the Sleep Extension condition increased their average sleep duration by 26.71 minutes based on actigraphy, while participants in the Fixed Sleep duration decreased by 0.14 minutes from pre- to post-intervention. Participants in the Sleep Extension condition had significantly lower scores on the BASC-2 Internalizing Problems Composite than participants in the Fixed Sleep Duration condition following the intervention, after controlling for sex and baseline internalizing symptoms, F(1, 98) = 4.18, p = 0.044. On average, the Internalizing Problems Composite score of participants in the Sleep Extension condition decreased by almost half a standard deviation (4.65 ± 6.41 points), compared to a decrease of 2.31 ± 6.59 points for participants in the Fixed Sleep Duration condition. There were no significant effects for self-report. Conclusions: Youth with T1DM obtained insufficient sleep and experienced high rates of internalizing symptoms. The results also suggest that relations between sleep and internalizing symptoms exist; however, these associations may be more driven by other aspects of sleep rather than actual sleep loss, such as nighttime sleep disturbance, daytime sleepiness, and variability of the sleep schedule. The findings further indicated that a sleep extension intervention was effective in increasing sleep duration, as well as reducing parent-reported internalizing symptoms in a sample of children and adolescents with T1DM. This intervention has the potential to be utilized as a cost effective, and relatively easy to implement method for reducing internalizing symptoms in youth with T1DM.