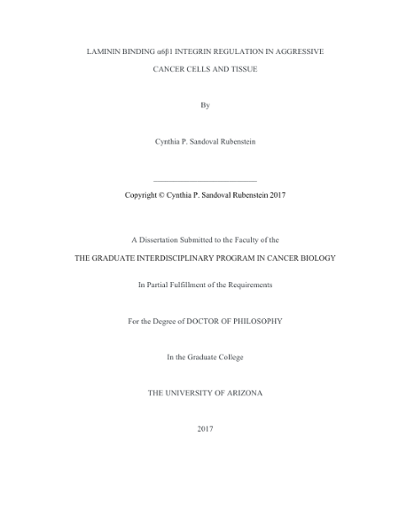 Despite recent advances in early detection, in 2017 prostate cancer is estimated to claim over 26,000 lives in the United States alone. Prostate cancer related morbidity and mortality is a result of secondary skeletal metastasis. Therefore, better understanding of the underlying molecular mechanisms of prostate tumor cell migration and subsequent metastasis is vital for improved clinical outcomes. Interestingly, integrin α6, a laminin receptor, is highly expressed in a number of aggressive tumor types including prostate and is associated with increased metastasis and reduced patient survival. Preliminary studies by our group found that α6 integrin undergoes a post-translational modification mediated by the serine protease, uPA and its receptor, uPAR, leading to the cleavage of α6 integrin and production of the tumor specific structural variant integrin α6p. Cleavage of this laminin receptor and production of α6p variant gives rise to an aggressive phenotype, markedly increasing tumor cell migration and invasion. Thus, the work conducted here sought to identify the function and efficacy of these prominent proteins in various aspects of tumor cell migration as well as the factors regulating α6 integrin cleavage. Interestingly, utilization of a co-culture system of prostate tumor cells and macrophages found that a direct and indirect interaction between the two cell populations influenced α6 integrin cleavage. Specifically, prostate tumor cell interactions with macrophages, a known immune cell population that is highly observed in a number of primary tumors, resulted in increased protein levels of uPAR on the surface of prostate tumor cells that led to a significant production of α6p and subsequently increased invasion. Additionally, key downstream effectors of integrin signaling, including FAK, ILK, and actin, were found to regulate production of the tumor specific variant integrin α6p. Depletion of FAK, ILK, or actin, resulted in a significant increase in uPAR protein expression and subsequent α6 integrin cleavage, a regulatory event previously not known of these integrin signaling effector molecules. In addition, silencing of another prominently expressed laminin receptor, integrin α3β1, led to a significant increase in the cohesive collective phenotype exhibited by aggressive prostate tumor cells that was found to be facilitated by α6 integrin cleavage. Depletion of integrin α3β1 resulted in increased surface uPAR expression and increased lateral association with α6 integrin, which resulted in a striking increase in α6p production, a novel finding showing the regulation of one laminin receptor is dependent on the expression of another. Furthermore, the expression of α6 integrin as well as uPAR, was found to be highly expressed in aggressive pancreatic tumor cells. This expression pattern was found to significantly increase in response to the development of drug resistance and increased invasive potential. This finding showed a never before seen efficacy of integrin and uPAR expression in dictating acquired drug resistance in pancreatic tumor cells and demonstrates their potential use as prognostic biomarkers for acquired chemotherapy resistance. Taken together, the work conducted here illustrates the utility in further understanding the role of integrins and their regulation in mediating tumor cell migration and subsequent metastasis in the progression of aggressive epithelial cancers.