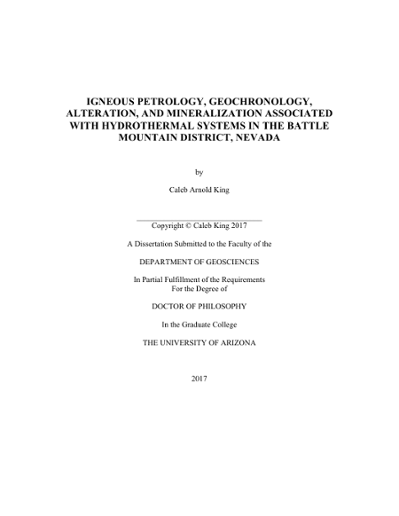 Eocene magmatism in the Great Basin is spatially and temporally associated with major gold mineralization and with the early stages of the westward retreat of magmatism from its eastern-most advance. The Battle Mountain Mining District in north-central Nevada is one of the more prominent areas of Eocene intrusive activity and Au-(Cu) mineralization. The district hosts Jurassic dikes, three centers of Cretaceous magmatism, as well as the major magmatic event of the late Eocene. This study, however, focuses on the youngest of the three events and looks in depth at the Eocene igneous centers across the district and their associated hydrothermal alteration and mineralization. The major areas of late Eocene magmatism and hydrothermal activity are at Elder Creek in the north, Copper Basin in the east, and Copper Canyon in the south, along with the smaller occurrences and deposits such as Buffalo Valley, Modoc, Long Peak, and Timber Canyon. New U-Pb ages on zircons were determined for 38 igneous rocks from around the district. These ages along with the 67 previously published U-Pb, Ar-Ar, and K-Ar ages were used to constrain the timing of emplacement of all of the igneous centers of Eocene age to a contracted period beginning around 42 Ma and ending between 39 and 38 Ma. The internal consistency in the resulting U-Pb ages requires that many of the previous dates in the district, especially the K-Ar ages, should be viewed with caution. Inherited cores were found in the zircons from 37 of the 38 samples analyzed in this study. This includes both abundant Jurassic and Cretaceous cores that are likely derived from older igneous rocks in the subsurface, as well as abundant cores of other ages that resemble but do not fully match the reported detrital zircon populations of the allochthonous sedimentary rocks from the Roberts Mountains and Golconda allochthons. Populations of zircons that are not known from surficial exposures imply that other rocks may be present at depth provided the some of the inherited zircons to the magmas. To better characterize the Eocene magmas, intrusive rocks were analyzed for major and selected trace elements, and their constituent minerals were analyzed by electron microprobe. Rock compositions are broadly calc-alkaline, metaluminous to weakly peraluminous, and range from quartz monzodiorites to high-silica rhyolites, with the majority of the rocks being granodiorites. Based on their titanite + magnetite ± ilmenite mineralogy and the compositions of biotite and hornblende, the igneous rocks are relatively oxidized with average ΔNNO values of +1.16 at 500 bars, +1.74 at 1000 bars and +2.29 at 2000 bars. Aluminum-in-hornblende with plagioclase thermobarometry on mineral rims indicates that the magmas were emplaced in the upper 5 km of the crust. Data from certain phenocryst interiors and from porphyritic dike swarms, however, reflects higher equilibration pressures and may indicate the position of an underlying source at a depth of 10-15 km. Overall these data characterize the Eocene magmatic system over ~10 km vertical extent. Hydrogen isotopic evidence suggests a minimum of two major fluids sources in these hydrothermal systems to explain the origin of the diverse mineralization and alteration in the district. The Na-Ca(-K) types of alteration, which are observed in many parts of the district, suggest there is a large influx of external saline fluids that contained isotopically heavy hydrogen in all of the major Eocene deposits. The range of δD values for all actinolite samples associated with the Na-Ca(-K) types is from -19‰ to -59‰. These values represent a significant shift from the δD values of hydrous minerals in the magmas and in the associated potassic alteration where the range of δD values for biotite is from -35‰ to -82‰, for amphiboles it is from -55‰ to -92‰, and for secondary biotite is from -34‰ to -90‰. The values for unaltered igneous hornblende and biotite are akin to those of magmatic water, whereas the heavier isotopic compositions from actinolite plot in the fields of either basinal brines or metamorphic fluids. In contrast, the sulfur isotopic compositions from these systems are surprisingly homogeneous across the district. Alteration assemblages characterized by petrographic and electron microprobe studies. Alteration of siliciclastic and igneous rocks includes: potassic, sericitic, sodic-calcic, calcic, and potassic-calcic alteration. Two types of skarn occur in the district. Fortitude-type skarns replace carbonate rocks and consist of hedenbergite + diopside + andradite + pyrrhotite with Au+Cu, mineralization whereas Labrador-type, potassic-calcic and calcic-ferric alteration and skarns replace feldspathic, silicic, and carbonate rocks, respectively, and consist of andradite + diopside + hematite + magnetite with Au+Cu mineralization. Taken together, the volume and distribution of these assemblages, along with fluid inclusion data, hydrogen isotope compositions, and petrologic considerations indicate two fluid sources: magmatic fluids generated potassic, sericitic, and Fortitude-type skarns, and moderately saline, non-magmatic fluids produced Na-Ca(-K) alteration mineral assemblages and Labrador-type skarns. Those features inferred to be magmatic-hydrothermal are restricted in their extent and related to particular intrusive phases, whereas the Na-Ca(-K) alteration features typically extend over several kilometers and are not correlated with any particular intrusive phase. Observations within the Battle Mountain district and regionally indicate that a variety of fluids – magmatic and non-magmatic – played significant roles in Eocene intrusion-centered hydrothermal systems. Consequently both fluid types need to be considered in interpreting Cenozoic metallogeny in the northern Great Basin.