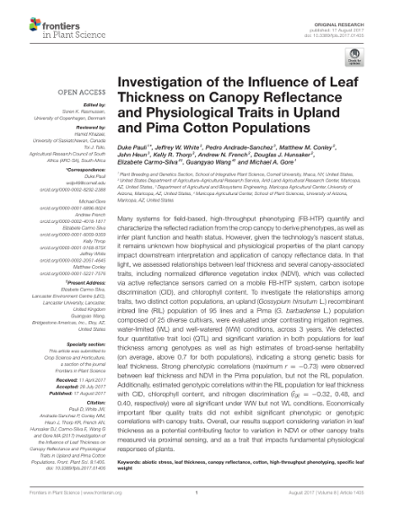 Investigation of the Influence of Leaf Thickness on Canopy Reflectance and Physiological Traits in Upland and Pima Cotton Populations 2017, 8 Frontiers in Plant Science

Copyright © 2017 Pauli, White, Andrade-Sanchez, Conley, Heun, Thorp, French, Hunsaker, Carmo-Silva, Wang and Gore. This is an open-access article distributed under the terms of the Creative Commons Attribution License (CC BY).

Many systems for field-based, high-throughput phenotyping (FB-HTP) quantify and characterize the reflected radiation from the crop canopy to derive phenotypes, as well as infer plant function and health status. However, given the technology's nascent status, it remains unknown how biophysical and physiological properties of the plant canopy impact downstream interpretation and application of canopy reflectance data. In that light, we assessed relationships between leaf thickness and several canopy-associated traits, including normalized difference vegetation index (NDVI), which was collected via active reflectance sensors carried on a mobile FB-HTP system, carbon isotope discrimination (CID), and chlorophyll content. To investigate the relationships among traits, two distinct cotton populations, an upland (Gossypium hirsutum L.) recombinant inbred line (RIL) population of 95 lines and a Pima (G, barbaderise L.) population composed of 25 diverse cultivars, were evaluated under contrasting irrigation regimes, water-limited (WL) and well-watered pm conditions, across 3 years. We detected four quantitative trait loci (QTL) and significant variation in both populations for leaf thickness among genotypes as well as high estimates of broad-sense heritability (on average, above 0.7 for both populations), indicating a strong genetic basis for leaf thickness. Strong phenotypic correlations (maximum r = -0.73) were observed between leaf thickness and NDVI in the Pima population, but not the RIL population. Additionally, estimated genotypic correlations within the RIL population for leaf thickness with CID, chlorophyll content, and nitrogen discrimination (r(gij) = -0.32, 0.48, and 0.40, respectively) were all significant under WW but not WL conditions. Economically important fiber quality traits did not exhibit significant phenotypic or genotypic correlations with canopy traits. Overall, our results support considering variation in leaf thickness as a potential contributing factor to variation in NDVI or other canopy traits measured via proximal sensing, and as a trait that impacts fundamental physiological responses of plants.