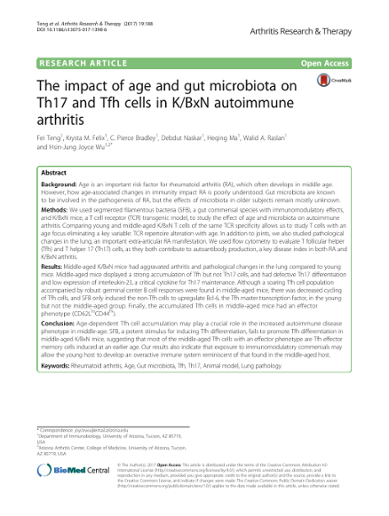 The impact of age and gut microbiota on Th17 and Tfh cells in K/BxN autoimmune arthritis 2017, 19 (1) Arthritis Research & Therapy

Background: Age is an important risk factor for rheumatoid arthritis (RA), which often develops in middle age. However, how age-associated changes in immunity impact RA is poorly understood. Gut microbiota are known to be involved in the pathogenesis of RA, but the effects of microbiota in older subjects remain mostly unknown. Methods: We used segmented filamentous bacteria (SFB), a gut commensal species with immunomodulatory effects, and K/BxN mice, a T cell receptor (TCR) transgenic model, to study the effect of age and microbiota on autoimmune arthritis. Comparing young and middle-aged K/BxN T cells of the same TCR specificity allows us to study T cells with an age focus eliminating a key variable: TCR repertoire alteration with age. In addition to joints, we also studied pathological changes in the lung, an important extra-articular RA manifestation. We used flow cytometry to evaluate T follicular helper (Tfh) and T helper 17 (Th17) cells, as they both contribute to autoantibody production, a key disease index in both RA and K/BxN arthritis. Results: Middle-aged K/BxN mice had aggravated arthritis and pathological changes in the lung compared to young mice. Middle-aged mice displayed a strong accumulation of Tfh but not Th17 cells, and had defective Th17 differentiation and low expression of interleukin-23, a critical cytokine for Th17 maintenance. Although a soaring Tfh cell population accompanied by robust germinal center B cell responses were found in middle-aged mice, there was decreased cycling of Tfh cells, and SFB only induced the non-Tfh cells to upregulate Bcl-6, the Tfh master transcription factor, in the young but not the middle-aged group. Finally, the accumulated Tfh cells in middle-aged mice had an effector phenotype (CD62LloCD44hi). Conclusion: Age-dependent Tfh cell accumulation may play a crucial role in the increased autoimmune disease phenotype in middle-age. SFB, a potent stimulus for inducing Tfh differentiation, fails to promote Tfh differentiation in middle-aged K/BxN mice, suggesting that most of the middle-aged Tfh cells with an effector phenotype are Tfh effector memory cells induced at an earlier age. Our results also indicate that exposure to immunomodulatory commensals may allow the young host to develop an overactive immune system reminiscent of that found in the middle-aged host.

Except where otherwise noted, this item's license is described as © The Author(s). 2017 Open Access This article is distributed under the terms of the Creative Commons Attribution 4.0 International License.