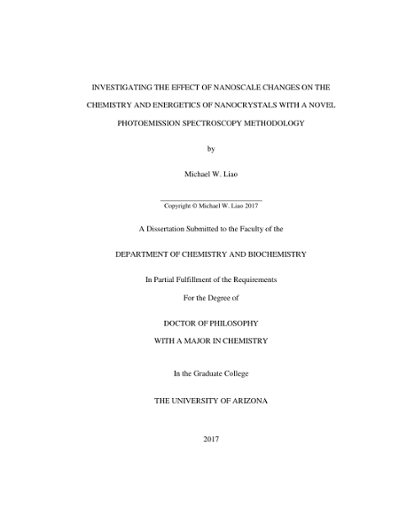 This dissertation explores the effect of nanometer-scale changes in structure on the energetics of photocatalytic and photovoltaic materials. Of particular interest are semiconductor nanocrystals (NCs), which have interesting chemical properties that lead to novel structures and applications. Chief among these properties are quantum confinement and the high surface area-to-volume ratio, which allow for chemical tuning of the energetics and structure of NCs. This tunable energetic landscape has led to increasing application of NCs in various areas of research, including solar energy conversion, light-emitting diode technologies, and photocatalysis. However, spectroscopic methods to determine the energetics of NCs have not been well developed, due to chemical complexities of relevant NCs such as polydispersity, capping ligand effects, core-shell structures, and other chemical modifications. In this work, we demonstrate and expand the utility of photoelectron spectroscopy (PES) to probe the energetics of NCs by considering the physical processes that lead to background and secondary photoemission to enhance photoemission from the sample of interest. A new methodology for the interpretation of UP spectra was devised in order to emphasize the minute changes to the UP spectra line shape that arise from nanoscopic changes to the NCs. We applied various established subtractions that correct for photon source satellites, secondary photoelectrons, and substrate photoemission. We then investigated the effect of ligand surface coverage on the surface chemistry and density of states at the top of valence band (VB). We systematically removed ligands by increasing numbers of purification steps for two diameters of NCs and found that doing so increased photoemission density at the top of the VB, which is due to undercoordinated surface atoms. Deeper VB structure was also altered, possibly due to reorganization of the atoms in the NC. Using the new UPS interpretation methodology, we examined the evolution of the valence band energy (EVB) of CdSe NCs as it was modified from spherical NC to rod to Au-NP tipped nanorod (NR). We also employed potential-modulated attenuated total reflectance spectroscopy (PM-ATR) to probe the conduction band energy (ECB) of the series. The EVB decreased with each modification, which is predicted with a band-bending model. This trend was also observed in the ECB, as revealed by spectroelectrochemistry, along with the appearance of new metal-semiconductor states in the band gap. UPS was finally used to investigate the even more complex Pt-NP tipped CdSe@CdS core@shell NR heterostructure. The addition of the CdS shell decreases the EVB relative to CdSe, as expected from common cation II-VI compounds. The Pt-NC increases the EVB, which, like the Au-CdSe NR, is predicted by employing a band-bending model. XPS revealed that PtSx-like chemical states were formed near the CdS-Pt interface. These experiments, along with the improved UP spectra interpretation methodology, demonstrate the wealth of information regarding surface chemistry and energetics that can be obtained with PES which can be applied to not only NCs, but also to metal oxide or molecular thin films.