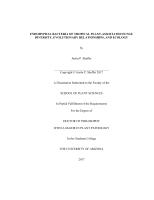 Arnold, A. Elizabeth
Baltrus, David A.
﻿

A growing understanding of complex biotic interactions clarified the importance of symbioses with respect to the ecology and evolution of life. In particular, knowledge of symbioses between eukaryotes and microorganisms such as bacteria and fungi has revolutionized the fields of medicine and agriculture, and made clear the roles of microbes in fostering human and environmental sustainability. For example, diverse fungi associate with the seeds of plants following dispersal. These fungi can influence seed survival and germination in a host-specific and spatially explicit manner, thus influencing plant community dynamics in agricultural and natural systems. In species-rich tropical forests, seed-fungus interactions are emerging as one of the most important aspects of plant demography and community ecology. However, even closely related fungi can have opposing effects on seeds of particular plants, such that mechanisms influencing host-specific effects require further attention. Such mechanisms can include genomic traits of fungi and hosts, and the environmental context of interactions. However, studies have shown that many fungi also harbor endosymbionts than can influence their functional traits. In particular, fungi often harbor endohyphal bacteria that influence fungal phenotypes. This suggested the potential for similar, co-occurring microbes to influence the ecology of seed-associated fungi. Here, I explore the diversity, evolutionary relationships, and influence on fungal phenotypes of endohyphal bacteria inhabiting seed- and leaf-associated fungi with a focus that begins in tropical forest ecology and expands to include gene expression in an emerging model system from the temperate zone. To determine the occurrence, abundance, taxonomic diversity, and phylogenetic diversity of endohyphal bacteria among tropical seed-associated fungi, my coauthors and I used PCR and fluorescence microscopy to screen members of two common orders of seed-associated fungi, comparing their communities to those in closely related foliar endophytic fungi. We revealed a high frequency and diversity of endohyphal bacteria among both groups of fungi. We then used phylogenetic and community ecological analyses to show a lack of congruence between phylogenies of bacteria and fungi. Although seed-associated and foliar endophytic fungi share evolutionary histories, they harbor distinct endohyphal bacterial communities. To explore the influence of endohyphal bacteria on fungal phenotypes important for interactions with seeds, my coauthors and I examined a single fungus-bacterium pair consisting of a member of a well-known group of pathogenic fungi found to harbor an endohyphal bacterium closely related to those with known chitinolytic activity. We created fungal clones that were free of endohyphal bacteria, and carried out a phenotypic microarray assay comparing use of 95 unique carbon sources by cured and uncured clones. Across the majority of substrates, the fungal clones harboring endohyphal bacteria grew more rapidly and to a greater extent than the cured clones. Thus the endohyphal bacterium was associated with broader substrate use and more effective use of a variety of substrates relevant to plant biology, including seed germination. To assess the influence of endohyphal bacteria with respect to the outcomes of seed-fungus interactions, my coauthors and I examined six fungus-bacterium pairs and their interactions with the seeds of five tropical pioneer tree species. We showed that although endohyphal bacteria have little impact on colonization of seeds by fungi, they significantly altered the survival and germination of infected seeds. In most cases, endohyphal bacteria reduced the negative impacts of fungi on seeds: strains harboring them responded more similarly to uninoculated controls, whereas strains cured of them exhibited significantly reduced survival and germination. Seeds infected by fungi of the same genotype that differ with respect to the identity of their endohyphal bacteria exhibited differences, but so did seeds infected by strains of those isolates not harboring bacteria, suggesting that factors in addition to the presence of endohyphal bacteria can drive variation in the outcomes of seed-fungus interactions. Together these analyses suggest intricate interactions between fungi and bacteria that result in context-dependent outcomes. This turned our focus to gene expression as a means to understand mechanisms of interactions between endohyphal bacteria and their fungal hosts. Last, my coauthors and I describe methods we developed to co-culture fungi and their endohyphal bacteria for downstream analysis of differences in gene expression among a fungus-bacterium pair and axenic cultures of each symbiont. We focused on an emerging model system: a foliar endophytic strain of Pestalotiopsis aff. neglecta (Ascomycota) known to harbor an endohyphal bacterium in the genus Luteibacter (Xanthomonadaceae). The focal bacterium is in part reliant on its host fungus for acquisition of certain sulfur-containing compounds such as sulfate. We showed that inoculating a low-methionine growth medium with bacteria recovered in exponential phase from a high-methionine medium supports growth suitable for comparing axenic growth with that in co-culture with its host fungus. Although bacterial cell density in co-cultures was significantly greater than that in axenic cultures, the opposite was true for the host fungus. We expect results from transcriptomics analyses to reflect partial reliance on– and antagonism of Pestalotiopsis by Luteibacter, and here present the first pipeline of methods for examining gene expression for a facultatively symbiotic endohyphal bacterium and its host, a member of the most species-rich and economically important fungal phylum.