The Effects of Healthy Aging On Memory Reconsolidation 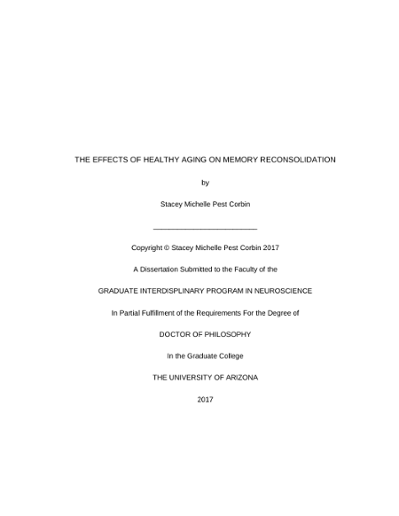 Reconsolidation theory states that stabilized memories can be reactivated and altered in some way; the memory must then be made stable once again by a process known as reconsolidation. A substantial number of studies have aimed to examine this process and the conditions under which it can occur in animal models and young adults. However, few studies have examined the impact of aging on memory reconsolidation. It has been established that aging affects episodic memories, as a result of several different changes in aging. Further, associative, source, and context memories have been found to be affected by aging. Additionally, consolidation, the process that occurs prior to reconsolidation, has been linked to age-related memory deficits. Given these changes with age, it is possible that memory reconsolidation could also be affected. This dissertation sought to examine the effects of aging on reconsolidation in an established set-learning paradigm typically utilized in young adults to demonstrate reconsolidation-mediated memory updating. In Experiment 1, older adult participants were taught sets of objects on two different days, with one group receiving a reminder intended to reactivate the first day's memory. On a third day, a recognition memory task was given. We found that reconsolidation processes seem relatively intact in our population of older adults. Further, source confusion was implicated in addition to memory updating as the cause of memory errors in the group that received the reminder. Other measures, such as spatial awareness and sleep, were utilized to help explain the outcome of the experiment. In Experiment 2, young adults performed the same procedure as in Experiment 1 to determine the role of some of the aspects of the procedure in this paradigm. Specifically, we wanted to establish whether an added task, spread across the two days of learning, influenced the outcome of this paradigm. It was concluded that this task likely had an influence, such that even the group that did not receive the reminder showed evidence of memory updating. We also wanted to determine a baseline for the spatial awareness task used in the previous experiment. However, results were inconclusive. In Experiment 3, we investigated the time line of errors made by older adults by testing their memory for the first set of objects shortly after they learned the second set, as opposed to on a third day. However, free recall was used as the memory task, unlike the previous two experiments. Unexpectedly, errors were immediately apparent for the group that did not receive the reminder but not for the group that did. The conclusion of this experiment was that the task used to test memory may play a major role in the outcome of this paradigm when performed by older adults. Further testing will need to be performed to fully understand this result. Overall, memory reconsolidation appears to be intact in older adults, though perhaps not in the form seen in young adults. Reconsolidation seen in older adults could be affected by different modes of reactivation, sleep, and methods of memory testing. However, several of the present results could be open to multiple interpretations, which require future research to untangle.