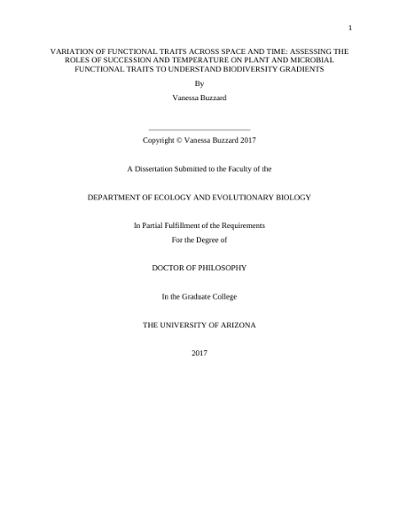 Traditionally, the study of biodiversity has focused on quantifying patterns of species diversity, or species richness, by simply counting the number of species across environmental gradients. This approach has been fundamental to ecological investigations and thinking with regards to identifying patterns of biodiversity. Although species diversity is the most commonly used dimension of biodiversity, species diversity alone does not provide a mechanistic understanding of biodiversity gradients. By also quantifying the genetic and phylogenetic diversity of a population, community or ecosystem, ecologists can become more informed on the relationships organisms have with one another, as well as their potential to adapt to changes in their environment. While each of these approaches provides methods for characterizing biodiversity, they do not offer direct insight into what species do, how they function, or how they will respond to changes in their environment. Functional, or trait-based ecology, provides an informative alternative to species-centric approaches that seeks to understand patterns of biodiversity in terms of functional traits. Functional traits capture fundamental tradeoffs in life history strategies that can be used to determine species ecological roles and can be used to scale from organisms to ecosystems to ask broad ecological questions. The overarching goal of my dissertation is to add additional links to trait-based ecology by identifying potential sources of trait variation across different spatial and temporal gradients between varying levels of biological organization. By assessing variation across spatial-temporal scales, I tested two prominent assumptions of trait-based ecology. First, I tested the trait-environment assumption wherein traits affect ecosystem processes. Therefore, there should be a predictable relationship between traits, their environment, and ecosystem function across large ecological gradients and between broad taxonomic groups. Second, I tested the assumption that interspecific trait variation exceeds intraspecific trait variation; thus, the species mean trait value captures much of the variation for a given trait. My study systems include the latitudinal diversity gradient of North America, forests of varying successional age in the tropical dry forests of Costa Rica, and a subalpine meadow of Colorado. First, we collected leaf trait data and soil microbial data at six sites across the latitudinal diversity gradient to test a central hypothesis of trait-based ecology, primarily that shifts in plant traits associated with decomposition and nutrient availability ramify to influence microbial functioning. We found that changes in plant traits not only reflect nutrient limitation across broad ecological gradients, but also have important regional effects on biogeochemical processes, microclimates, and energy fluxes that influence microbial diversity. Furthermore, changes in plant function correspond to changes in bacterial functional traits related to carbon, nitrogen, and phosphorus cycling, although only fungal functional traits related to nitrogen cycling change across the gradient. Our results represent one of the first comparisons of functional diversity within and across bacterial, fungal, and plant communities across a latitudinal gradient. Next, we collected leaf functional trait and abiotic data across a 110-year chronosequence within a tropical dry forest in Costa Rica. We focused on six leaf functional traits for woody plants within 14 plots that have varying times since disturbance in the tropical dry forests of Guanacaste, Costa Rica. When we compare species composition and community function, we find that older tropical dry forest communities differ significantly from younger forests in species composition, above ground biomass, and functional traits. Species in younger forests have traits better adapted to hotter temperatures and increased drought. For example, young forests are characterized by thicker leaves with higher water use efficiency. In contrast, older forests have thinner broader leaves more susceptible to desiccation. Interestingly, in contrast to expectations, variation in these functional traits does not generally change through succession. This means that the different species within each community are converging on similar functional strategies. Our results also suggest that regenerating tropical dry forests are resilient and can be restored within a human lifetime. Finally, we evaluated patterns of trait variation within and between three years to understand the widely-ignored source of temporal variation associated with seasonality and test the assumption that interspecific trait variation exceeds intraspecific variation and the species means account for the overall variation of a trait. To do this, we collected leaf data from eight species at a local site in Colorado throughout the growing season, over three years, as well as extracted data from a global database and made comparisons to assess sources trait variation. We found that, although the timing of collection influences one’s ability to capture fine-scale processes occurring on short time scales, collecting data locally throughout the growing season and across multiple years does not significantly influence species ranking. However, species ranking is not conserved for comparisons between local and global databases. This suggests that extra care should be taken when applying global data for species-specific studies and that ‘snap-shot’ sampling designs may over- or underestimate community trait distributions, reducing predictability. Overall, this body of work extends beyond understanding patterns of species diversity through the inclusion of species function. It contributes to our understanding of variation in biodiversity across broad ecological gradients and between diverse taxonomic groups, how communities assemble via functional traits, and the importance of temporal variation on functional traits for detecting fine-scale patterns.