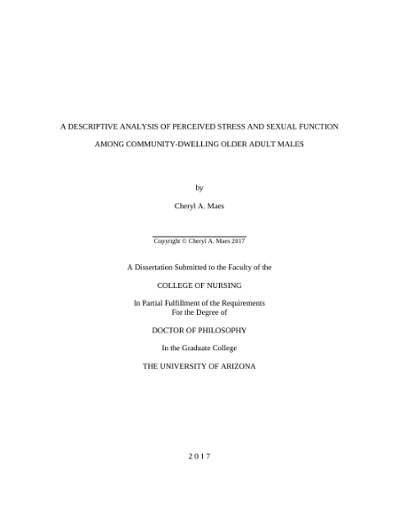 Background: A critical component of sexual health is healthy sexual functioning; being able to experience sexual enjoyment and satisfaction when desired. Sexual difficulties are not unusual and can have either physical or psychological causes. An estimated 100 million males worldwide suffer from erectile dysfunction (ED), with the expectation that this sexual problem will increase to 322 million cases by the year 2025 (Bacon, Mittleman, Kawachi, Giovannicci, Glasser, & Rimm, 2003). The prevalence of ED greatly escalates in older males and those with Cardiovascular Disease, Hyperlipidemia, and Diabetes due to related endothelial dysfunction (Bivalacqua, Usta, Champion, Kadowitz, & Hellstrom, 2003). Sexual dysfunction is a concern for all males, including those over the age of 65. Because sexual function or sexuality is a critical factor contributing to the quality of life among older adults (Gelfand, 2000; Robinson & Molzahn, 2007), attention to sexual dysfunction is needed to ensure a high quality of life among older adult males (Vincent & Velkoff, 2010). Furthermore, psychological and emotional stress have been associated with sexual dysfunction among males; both as a cause and a result of this condition. Purpose: The purpose of this study was to determine the level of distress associated with perceived stress and sexual function among community-dwelling older adult males in stable relationships. Study Aims: The study aims are to 1) describe perceived stress and sexual function in a community-dwelling older adult male population, 2) describe the relationship between perceived stress and sexual function, and 3) describe the relationship between perceived stress and sexual function while controlling for individual characteristics of the sample. Methods: A descriptive, cross-sectional research design was used. The sampling technique was a convenience sample of males aged 65 and older enrolled in a university affiliated lifelong learning institute in the southwestern United States. Inclusion criterion consisted of independent, active males aged 65 and older, in addition to being able to speak and read English. Exclusionary criterion comprised of those who have cognitive impairment determined by an Abbreviated Mental Test Score (AMTS) of six or less. Results: The majority of the 92 participants were between the ages of 65-70 and Caucasian. Overall, the sample was highly educated with most holding an Associate college degree or more advanced degree, was married, in age-related retirement, currently not working, and considered them self financially within the middle to higher middle-income level. Over half declared they have had sexual activity in the last month with an average level of sexual functioning and above average level of sexual satisfaction. In general, the participants indicated they are not stressed. There is a significant and negative correlation between perceived stress and sexual function (satisfaction). There is a significant relationship between perceived stress and Obesity with sexual function (erection, ejaculation, and satisfaction). Significant univariate effects were found on age with sexual function (erection, ejaculation, and satisfaction). Furthermore, significant univariate effects were found on Obesity with sexual function (ejaculation and satisfaction). Subsequently, a significant univariate effect was found on Cancer with sexual function (satisfaction). Significance: These study findings may serve as a foundation for enhancing sexual function; thus, establishing improved sexual health and quality of life among older adult males.