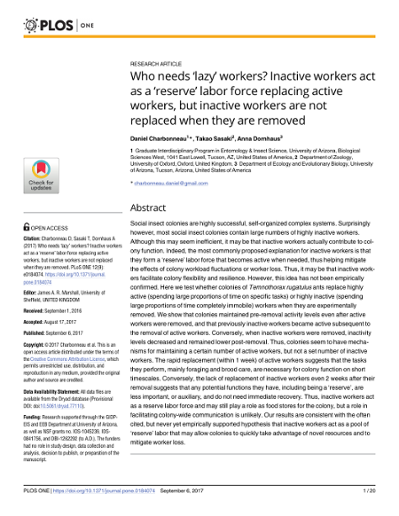 © 2017 Charbonneau et al. This is an open access article distributed under the terms of the Creative Commons Attribution License.

Social insect colonies are highly successful, self-organized complex systems. Surprisingly however, most social insect colonies contain large numbers of highly inactive workers. Although this may seem inefficient, it may be that inactive workers actually contribute to colony function. Indeed, the most commonly proposed explanation for inactive workers is that they form a 'reserve' labor force that becomes active when needed, thus helping mitigate the effects of colony workload fluctuations or worker loss. Thus, it may be that inactive workers facilitate colony flexibility and resilience. However, this idea has not been empirically confirmed. Here we test whether colonies of Temnothorax rugatulus ants replace highly active (spending large proportions of time on specific tasks) or highly inactive (spending large proportions of time completely immobile) workers when they are experimentally removed. We show that colonies maintained pre-removal activity levels even after active workers were removed, and that previously inactive workers became active subsequent to the removal of active workers. Conversely, when inactive workers were removed, inactivity levels decreased and remained lower post-removal. Thus, colonies seem to have mechanisms for maintaining a certain number of active workers, but not a set number of inactive workers. The rapid replacement (within 1 week) of active workers suggests that the tasks they perform, mainly foraging and brood care, are necessary for colony function on short timescales. Conversely, the lack of replacement of inactive workers even 2 weeks after their removal suggests that any potential functions they have, including being a 'reserve', are less important, or auxiliary, and do not need immediate recovery. Thus, inactive workers act as a reserve labor force and may still play a role as food stores for the colony, but a role in facilitating colony-wide communication is unlikely. Our results are consistent with the often cited, but never yet empirically supported hypothesis that inactive workers act as a pool of 'reserve' labor that may allow colonies to quickly take advantage of novel resources and to mitigate worker loss.