Sculpting and Weaving Alliances: Alabaster Funerary Sculpture and Tapestry in the Habsburg Netherlands, 1506-1549 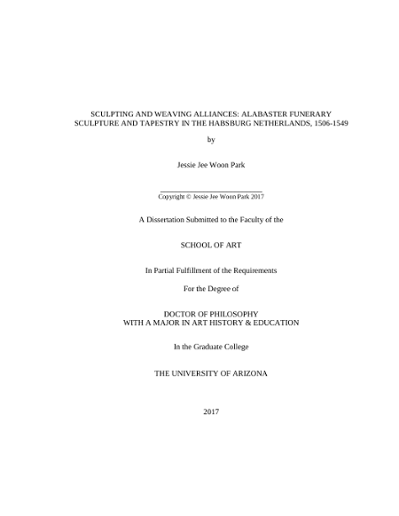 This dissertation explores how alabaster funerary sculptures and tapestries created complex and multifarious alliances between the Habsburgs and members of the high nobility. It proposes that the Habsburgs and the nobility negotiated their relationships with one another through commissioning and displaying works of art that used particular materials, iconographies and styles referencing the politically potent and culturally significant heritage of the Burgundian dukes and the ancient Roman emperors. The alabaster sculptures and tapestries discussed in this two-part study were instrumental in defining and redefining, establishing and renewing these relationships. Part one is devoted to alabaster funerary sculpture in the fifteenth- and sixteenth-century Habsburg domain. The origin of great interest in alabaster, together with black marble (black limestone), was the Carthusian monastery, the Chartreuse de Champmol, near Dijon, which had housed the tombs of Philip the Bold, and of John the Fearless and his wife, Margaret of Bavaria. The tombs of the Burgundian dukes became a model for funerary monuments in alabaster of other members of the family and later also for the Habsburgs, including Margaret of Austria, who governed the Low Countries as regent after the death of her husband, Philibert II of Savoy (1480-1504). The tombs of Margaret of Austria, Philibert of Savoy, and his mother, Margaret of Bourbon in a monastery in Brou were intended to assert Habsburg-Savoyard alliance in a region equally desirable to the French for fulfilling their royal ambitions. Following the alabaster and black marble examples in Dijon and Brou, the tombs of Guillaume I de Croÿ and Marie de Hamal, and of Cardinal Guillaume II de Croÿ, originally in Heverlee, near Leuven, were located in a Celestine monastery church that served as a dynastic mausoleum for the noble family. The tombs of the Croÿs offer insight into the extent to which the nobles historically exercised power in the courts of Burgundy and Habsburg, even influencing Margaret of Austria to include all’antica elements in the alabaster funerary monuments and altarpiece in Brou that are otherwise designed in late flamboyant Gothic style. Part two is devoted to exploring tapestries in the Burgundian and Habsburg collections from the late-fourteenth to mid-sixteenth century. Members of the Burgundian and Habsburg families were key players in the development of the tapestry industry in the Low Countries, regulating tapestry production and trade. As an important part of the rulers’ self-fashioning, tapestries were collected, used as gifts, or hung during important occasions. To demonstrate how tapestries were used in a particular setting, I discuss the Seven Deadly Sins set and one tapestry from the History of Scipio Africanus series, both in the Habsburgs' collection, that were displayed during the imperial festivities at Binche and Mariemont in 1549. I examine how these tapestries as well as the specific activities that occurred in front of them and the particular viewers who witnessed and participated in these activities effectively and affectively communicated Habsburg propaganda to the elite local audience, and thereby helped to encourage their loyalty and support.