Global, regional, and national age-sex specific mortality for 264 causes of death, 1980–2016: a systematic analysis for the Global Burden of Disease Study 2016 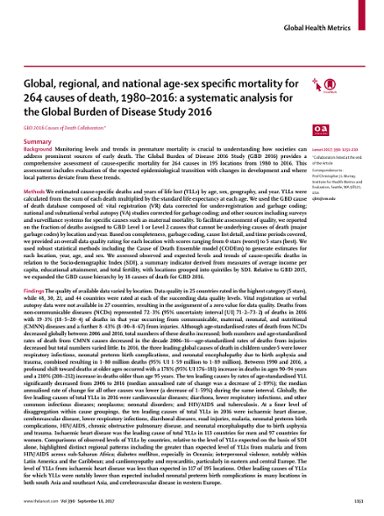 Background Monitoring levels and trends in premature mortality is crucial to understanding how societies can address prominent sources of early death. The Global Burden of Disease 2016 Study (GBD 2016) provides a comprehensive assessment of cause-specific mortality for 264 causes in 195 locations from 1980 to 2016. This assessment includes evaluation of the expected epidemiological transition with changes in development and where local patterns deviate from these trends. Methods We estimated cause-specific deaths and years of life lost (YLLs) by age, sex, geography, and year. YLLs were calculated from the sum of each death multiplied by the standard life expectancy at each age. We used the GBD cause of death database composed of: vital registration (VR) data corrected for under-registration and garbage coding; national and subnational verbal autopsy (VA) studies corrected for garbage coding; and other sources including surveys and surveillance systems for specific causes such as maternal mortality. To facilitate assessment of quality, we reported on the fraction of deaths assigned to GBD Level 1 or Level 2 causes that cannot be underlying causes of death (major garbage codes) by location and year. Based on completeness, garbage coding, cause list detail, and time periods covered, we provided an overall data quality rating for each location with scores ranging from 0 stars (worst) to 5 stars (best). We used robust statistical methods including the Cause of Death Ensemble model (CODEm) to generate estimates for each location, year, age, and sex. We assessed observed and expected levels and trends of cause-specific deaths in relation to the Socio-demographic Index (SDI), a summary indicator derived from measures of average income per capita, educational attainment, and total fertility, with locations grouped into quintiles by SDI. Relative to GBD 2015, we expanded the GBD cause hierarchy by 18 causes of death for GBD 2016. Findings The quality of available data varied by location. Data quality in 25 countries rated in the highest category (5 stars), while 48, 30, 21, and 44 countries were rated at each of the succeeding data quality levels. Vital registration or verbal autopsy data were not available in 27 countries, resulting in the assignment of a zero value for data quality. Deaths from non-communicable diseases (NCDs) represented 72.3% (95% uncertainty interval [UI] 71.2-73.2) of deaths in 2016 with 19.3% (18.5-20.4) of deaths in that year occurring from communicable, maternal, neonatal, and nutritional (CMNN) diseases and a further 8.43% (8.00-8.67) from injuries. Although age-standardised rates of death from NCDs decreased globally between 2006 and 2016, total numbers of these deaths increased; both numbers and age-standardised rates of death from CMNN causes decreased in the decade 2006-16-age-standardised rates of deaths from injuries decreased but total numbers varied little. In 2016, the three leading global causes of death in children under-5 were lower respiratory infections, neonatal preterm birth complications, and neonatal encephalopathy due to birth asphyxia and trauma, combined resulting in 1.80 million deaths (95% UI 1.59 million to 1.89 million). Between 1990 and 2016, a profound shift toward deaths at older ages occurred with a 178% (95% UI 176-181) increase in deaths in ages 90-94 years and a 210% (208-212) increase in deaths older than age 95 years. The ten leading causes by rates of age-standardised YLL significantly decreased from 2006 to 2016 (median annualised rate of change was a decrease of 2.89%); the median annualised rate of change for all other causes was lower (a decrease of 1.59%) during the same interval. Globally, the five leading causes of total YLLs in 2016 were cardiovascular diseases; diarrhoea, lower respiratory infections, and other common infectious diseases; neoplasms; neonatal disorders; and HIV/AIDS and tuberculosis. At a finer level of disaggregation within cause groupings, the ten leading causes of total YLLs in 2016 were ischaemic heart disease, cerebrovascular disease, lower respiratory infections, diarrhoeal diseases, road injuries, malaria, neonatal preterm birth complications, HIV/AIDS, chronic obstructive pulmonary disease, and neonatal encephalopathy due to birth asphyxia and trauma. Ischaemic heart disease was the leading cause of total YLLs in 113 countries for men and 97 countries for women. Comparisons of observed levels of YLLs by countries, relative to the level of YLLs expected on the basis of SDI alone, highlighted distinct regional patterns including the greater than expected level of YLLs from malaria and from HIV/AIDS across sub-Saharan Africa; diabetes mellitus, especially in Oceania; interpersonal violence, notably within Latin America and the Caribbean; and cardiomyopathy and myocarditis, particularly in eastern and central Europe. The level of YLLs from ischaemic heart disease was less than expected in 117 of 195 locations. Other leading causes of YLLs for which YLLs were notably lower than expected included neonatal preterm birth complications in many locations in both south Asia and southeast Asia, and cerebrovascular disease in western Europe. Interpretation The past 37 years have featured declining rates of communicable, maternal, neonatal, and nutritional diseases across all quintiles of SDI, with faster than expected gains for many locations relative to their SDI. A global shift towards deaths at older ages suggests success in reducing many causes of early death. YLLs have increased globally for causes such as diabetes mellitus or some neoplasms, and in some locations for causes such as drug use disorders, and conflict and terrorism. Increasing levels of YLLs might reflect outcomes from conditions that required high levels of care but for which effective treatments remain elusive, potentially increasing costs to health systems. Copyright (C) The Author(s). Published by Elsevier Ltd. This is an Open Access article under the CC BY 4.0 license.