Global, regional, and national incidence, prevalence, and years lived with disability for 328 diseases and injuries for 195 countries, 1990–2016: a systematic analysis for the Global Burden of Disease Study 2016 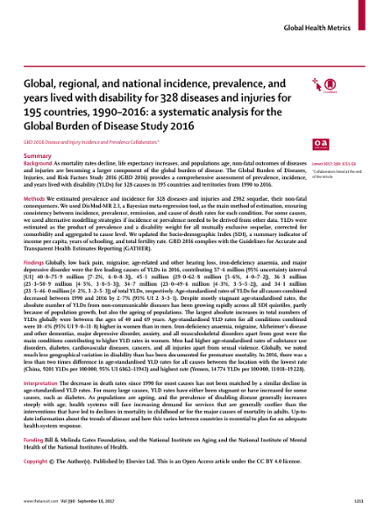 Background As mortality rates decline, life expectancy increases, and populations age, non-fatal outcomes of diseases and injuries are becoming a larger component of the global burden of disease. The Global Burden of Diseases, Injuries, and Risk Factors Study 2016 (GBD 2016) provides a comprehensive assessment of prevalence, incidence, and years lived with disability (YLDs) for 328 causes in 195 countries and territories from 1990 to 2016. Methods We estimated prevalence and incidence for 328 diseases and injuries and 2982 sequelae, their non-fatal consequences. We used DisMod-MR 2.1, a Bayesian meta-regression tool, as the main method of estimation, ensuring consistency between incidence, prevalence, remission, and cause of death rates for each condition. For some causes, we used alternative modelling strategies if incidence or prevalence needed to be derived from other data. YLDs were estimated as the product of prevalence and a disability weight for all mutually exclusive sequelae, corrected for comorbidity and aggregated to cause level. We updated the Socio-demographic Index (SDI), a summary indicator of income per capita, years of schooling, and total fertility rate. GBD 2016 complies with the Guidelines for Accurate and Transparent Health Estimates Reporting (GATHER). Findings Globally, low back pain, migraine, age-related and other hearing loss, iron-deficiency anaemia, and major depressive disorder were the five leading causes of YLDs in 2016, contributing 57.6 million (95% uncertainty interval [UI] 40.8-75.9 million [7.2%, 6.0-8.3]), 45.1 million (29.0-62.8 million [5.6%, 4.0-7.2]), 36.3 million (25.3-50.9 million [4.5%, 3.8-5.3]), 34.7 million (23.0-49.6 million [4.3%, 3.5-5.2]), and 34.1 million (23.5-46.0 million [4.2%, 3.2-5.3]) of total YLDs, respectively. Age-standardised rates of YLDs for all causes combined decreased between 1990 and 2016 by 2.7% (95% UI 2.3-3.1). Despite mostly stagnant age-standardised rates, the absolute number of YLDs from non-communicable diseases has been growing rapidly across all SDI quintiles, partly because of population growth, but also the ageing of populations. The largest absolute increases in total numbers of YLDs globally were between the ages of 40 and 69 years. Age-standardised YLD rates for all conditions combined were 10.4% (95% UI 9.0-11.8) higher in women than in men. Iron-deficiency anaemia, migraine, Alzheimer's disease and other dementias, major depressive disorder, anxiety, and all musculoskeletal disorders apart from gout were the main conditions contributing to higher YLD rates in women. Men had higher age-standardised rates of substance use disorders, diabetes, cardiovascular diseases, cancers, and all injuries apart from sexual violence. Globally, we noted much less geographical variation in disability than has been documented for premature mortality. In 2016, there was a less than two times difference in age-standardised YLD rates for all causes between the location with the lowest rate (China, 9201 YLDs per 100 000, 95% UI 6862-11943) and highest rate (Yemen, 14 774 YLDs per 100 000, 11 018-19 228). Interpretation The decrease in death rates since 1990 for most causes has not been matched by a similar decline in age-standardised YLD rates. For many large causes, YLD rates have either been stagnant or have increased for some causes, such as diabetes. As populations are ageing, and the prevalence of disabling disease generally increases steeply with age, health systems will face increasing demand for services that are generally costlier than the interventions that have led to declines in mortality in childhood or for the major causes of mortality in adults. Up-todate information about the trends of disease and how this varies between countries is essential to plan for an adequate health-system response. Copyright (C) The Author(s). Published by Elsevier Ltd. This is an Open Access article under the CC BY 4.0 license.