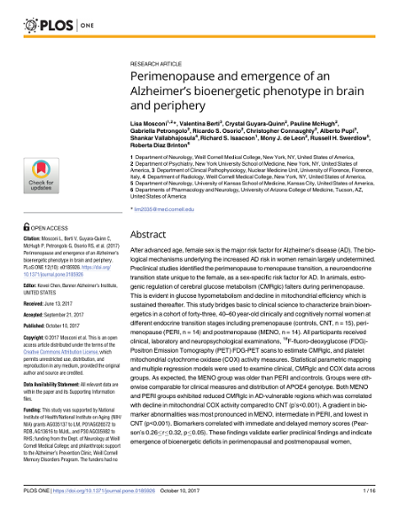 Perimenopause and emergence of an Alzheimer’s bioenergetic phenotype in brain and periphery 2017, 12 (10):e0185926 PLOS ONE

© 2017 Mosconi et al. This is an open access article distributed under the terms of the Creative Commons Attribution License.

After advanced age, female sex is the major risk factor for Alzheimer's disease (AD). The biological mechanisms underlying the increased AD risk in women remain largely undetermined. Preclinical studies identified the perimenopause to menopause transition, a neuroendocrine transition state unique to the female, as a sex-specific risk factor for AD. In animals, estrogenic regulation of cerebral glucose metabolism (CMRglc) falters during perimenopause. This is evident in glucose hypometabolism and decline in mitochondrial efficiency which is sustained thereafter. This study bridges basic to clinical science to characterize brain bioenergetics in a cohort of forty-three, 40-60 year-old clinically and cognitively normal women at different endocrine transition stages including premenopause (controls, CNT, n = 15), perimenopause (PERI, n = 14) and postmenopause (MENO, n = 14). All participants received clinical, laboratory and neuropsychological examinations, F-18-fluoro-deoxyglucose (FDG)Positron Emission Tomography (PET) FDG-PET scans to estimate CMRglc, and platelet mitochondrial cytochrome oxidase (COX) activity measures. Statistical parametric mapping and multiple regression models were used to examine clinical, CMRglc and COX data across groups. As expected, the MENO group was older than PERI and controls. Groups were otherwise comparable for clinical measures and distribution of APOE4 genotype. Both MENO and PERI groups exhibited reduced CMRglc in AD-vulnerable regions which was correlated with decline in mitochondrial COX activity compared to CNT (p's<0.001). A gradient in biomarker abnormalities was most pronounced in MENO, intermediate in PERI, and lowest in CNT (p<0.001). Biomarkers correlated with immediate and delayed memory scores (Pearson's 0.26 <= r <= 0.32, p <= 0.05). These findings validate earlier preclinical findings and indicate emergence of bioenergetic deficits in perimenopausal and postmenopausal women, suggesting that the optimal window of opportunity for therapeutic intervention in women is early in the endocrine aging process.