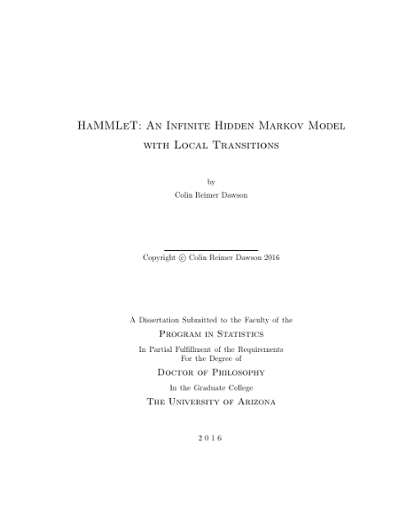 In classical mixture modeling, each data point is modeled as arising i.i.d. (typically) from a weighted sum of probability distributions. When data arises from different sources that may not give rise to the same mixture distribution, a hierarchical model can allow the source contexts (e.g., documents, sub-populations) to share components while assigning different weights across them (while perhaps coupling the weights to "borrow strength" across contexts). The Dirichlet Process (DP) Mixture Model (e.g., Rasmussen (2000)) is a Bayesian approach to mixture modeling which models the data as arising from a countably infinite number of components: the Dirichlet Process provides a prior on the mixture weights that guards against overfitting. The Hierarchical Dirichlet Process (HDP) Mixture Model (Teh et al., 2006) employs a separate DP Mixture Model for each context, but couples the weights across contexts. This coupling is critical to ensure that mixture components are reused across contexts. An important application of HDPs is to time series models, in particular Hidden Markov Models (HMMs), where the HDP can be used as a prior on a doubly infinite transition matrix for the latent Markov chain, giving rise to the HDP-HMM (first developed, as the "Infinite HMM", by Beal et al. (2001), and subsequently shown to be a case of an HDP by Teh et al. (2006)). There, the hierarchy is over rows of the transition matrix, and the distributions across rows are coupled through a top-level Dirichlet Process. In the first part of the dissertation, I present a formal overview of Mixture Models and Hidden Markov Models. I then turn to a discussion of Dirichlet Processes and their various representations, as well as associated schemes for tackling the problem of doing approximate inference over an infinitely flexible model with finite computa- tional resources. I will then turn to the Hierarchical Dirichlet Process (HDP) and its application to an infinite state Hidden Markov Model, the HDP-HMM. These models have been widely adopted in Bayesian statistics and machine learning. However, a limitation of the vanilla HDP is that it offers no mechanism to model correlations between mixture components across contexts. This is limiting in many applications, including topic modeling, where we expect certain components to occur or not occur together. In the HMM setting, we might expect certain states to exhibit similar incoming and outgoing transition probabilities; that is, for certain rows and columns of the transition matrix to be correlated. In particular, we might expect pairs of states that are "similar" in some way to transition frequently to each other. The HDP-HMM offers no mechanism to model this similarity structure. The central contribution of the dissertation is a novel generalization of the HDP- HMM which I call the Hierarchical Dirichlet Process Hidden Markov Model With Local Transitions (HDP-HMM-LT, or HaMMLeT for short), which allows for correlations between rows and columns of the transition matrix by assigning each state a location in a latent similarity space and promoting transitions between states that are near each other. I present a Gibbs sampling scheme for inference in this model, employing auxiliary variables to simplify the relevant conditional distributions, which have a natural interpretation after re-casting the discrete time Markov chain as a continuous time Markov Jump Process where holding times are integrated out, and where some jump attempts "fail". I refer to this novel representation as the Markov Process With Failed Jumps. I test this model on several synthetic and real data sets, showing that for data where transitions between similar states are more common, the HaMMLeT model more effectively finds the latent time series structure underlying the observations.