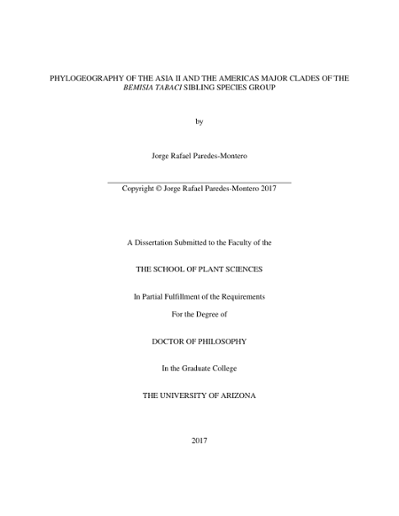 The Bemisia tabaci (Gennadius) sibling species group is known to comprise several morphologically undistinguishable mitotypes which can be separated into seven major phylogeographic clades using the 3' half of the mitochondrial cytochrome oxidase I gene. B. tabaci is the only vector of begomoviruses; it transmits the complex of viruses that cause the cotton leaf curl disease, which has rapidly spread from Pakistan to the Philippines, at southeast of Asia, in the last decade. The study of B. tabaci mitotypes has been limited to variants of worldwide distribution and those associated to agroecosystems, however, the study of indigenous mitotypes has been scarce. This dissertation provides a comprehensive study of the phylogeography and population biology of mitotypes belonging to two major phylogeographic clades, the Asia II and the Americas. The Asia II major clade contains the highest number of mitotypes, in contrast, there is a large gap in knowledge about mitotypes associated to highly endemistic niches in the Americas. To study the population biology of mitotypes belonging to the Asia II major phylogeographic clade, two fragments of the mtCOI gene were amplified by polymerase chain reaction (PCR) for adult whiteflies sampled from mono and multi-cropping systems in the provinces of Punjab and Sindh in Pakistan. Phylogenetic analyses suggested that three indigenous mitotypes were distinctively distributed across ecosystems of Pakistan. The Asia II-5 and II-7 were found restricted to multi-cropping systems of Lahore, while the Asia II-1 was found widespread throughout the cotton growing region of Pakistan. Moreover, population analyses suggested the Asia II-1 is undergoing demographic expansion following a recent selective sweep or bottleneck. This event explains the predominance of Asia II-1 in Pakistan and its spread towards the southern province of Sindh. Additionally, differences in DNA polymorphism and diversity between mtCOI fragments derived in dissimilar evolutionary pairwise distances, suggestive of future implications in the “species” delimitation at a global scale when choosing one fragment over the other. The endosymbiotic bacteria assemblages associated to indigenous mitotypes Asia II-1, II-5 and II-7 were studied by analysis of 16S rRNA profiles. Besides the primary symbiont Portiera, Arsenophonus was detected almost fixed in the studied populations and several unique strains of Arsenophonus were detected in Asia II-5 and II-7, suggesting possible unique environmental adaptation capacities of these mitotypes. Hierarchical clustering of 16S rRNA profiles, proposed host-based and environmental-related differentiation. Additionally, the disruption of parallel cladogenesis between the primary symbiont and B. tabaci, disallows rejection of the hypothesis that gene flow among B. tabaci mitotypes occurs. To study the population biology of indigenous mitotypes belonging to the Americas major clade, adult whiteflies were sampled from ecosystems of nine provinces in Ecuador. Based on phylogenetic analyses, three indigenous and one invasive mitotype were detected. Among the indigenous, a previously unrecognized mitotype, named ECU3, was found. Moreover, mitotypes were found coexisting in five locations, and the invasive B is thought to have displaced endemic mitotypes to the northern and eastern coastal habitats of Ecuador.