Searching for Vector-Like Quarks Using 36.1 fb^{-1} Of Proton-Proton Collisions Decaying to Same-Charge Dileptons and Trileptons + b-jets at √s = 13 TeV with The ATLAS Detector 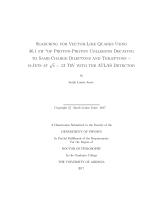 Since the discovery of the Higgs boson in 2012, the search for new physics beyond the Standard Model has been greatly intensified. At the CERN Large Hadron Collider (LHC), ATLAS searches for new physics entail looking for new particles by colliding protons together. Presented here is a search for a new form of quark matter called Vector-like Quarks (VLQ), which are hypothetical particles that are expected to have mass around a few TeV. VLQ can come in a variety of forms and can couple to their Standard Model (SM) quark counterparts, particularly to the third generation. They are necessary in several beyond the SM theories in order to solve the hierarchy problem. This search uses 36.1 fb−1of proton-proton collision data collected with the ATLAS detector at the LHC from August 2015 to October 2016. Only events with two leptons of the same charge, or three leptons, plus b-jets and high missing transverse energy are considered in the main analysis. This signature is rarely produced in the SM, which means the backgrounds in this analysis are relatively low. This analysis is sensitive to specific predicted decay modes from pair production of an up-type VLQ with a charge of +2/3, T, an up-type VLQ with a charge of +5/3, T5/3, and a down-type quark with a charge of −1/3, B, as well as single production of T5/3. There is another theorized VLQ that this analysis is not sensitive to: B−4/3, due to its primary decay mode, which is unable to produce the final-state signature of interest. The results from this analysis suggest only a slight deviation of data from SM backgrounds reaching as high as 1.89σ, which does not indicate evidence for VLQ. A mostly frequentist statistical technique, called the CLS Method, is used to interpret the data and set limits on the T, B, and T5/3 signal models. Using this method, exclusion limits are set at the 95% confidence level, effectively excluding T mass below 0.98 TeV, T5/3 mass below 1.2 TeV, and B mass below 1.0 TeV, assuming singlet branching ratios. Also, branching ratio independent limits are set on the T and B VLQ.