Development, Characterization, and Implementation of a System for Focused Ultrasound-Mediated Blood-Brain Barrier Opening In Mice 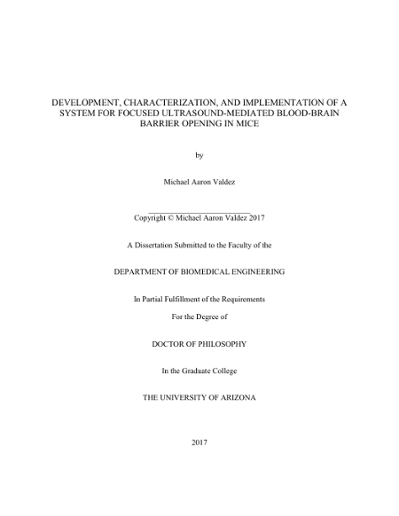 The blood-brain barrier BBB refers to the set of specialized endothelial cells that line the vasculature in the brain and effectively control movement of molecules into and out of the brain. While necessary for proper brain function, the BBB blocks 98% of drugs from entering the brain and is the most significant barrier to developing therapies for neurodegenerative diseases. Active transport allows some specific molecules to cross the BBB, but therapeutic development using this route has had limited success. A number of techniques have been used to bypass the BBB, but are often highly invasive and ineffective. Over the last two decades, a minimally invasive technique to transiently open the BBB has been under development that utilizes transcranial focused ultrasound (FUS) in combination with intravascular microbubble contrast agents. This method is often carried out in conjunction with magnetic resonance imaging (MRI) to guide and assess BBB opening and has been referred to as MRI guided FUS (MRgFUS). Because of the utility of mouse models of neurological disease and the exploratory nature of MRgFUS, systems that allow BBB opening in mice are a useful and necessary tool to develop and evaluate this method for clinical application. In this dissertation project, a custom built, cost-effective FUS system for opening the BBB in mice was developed, with the objective of using this device to deliver therapeutics to the brain. Being a custom device, it was necessary to evaluate the ultrasound output, verify in vivo safety, and anticipate the therapeutic effect. The scope of the work herein consists of the design, construction, and evaluation of system that fulfills these requirements. The final constructed system cost was an order of magnitude less than any commercially available MRgFUS system. At this low price point, the hardware could allow the implementation of the methodology in many more research areas than previously possible. Additionally, to anticipate the therapeutic effect, molecules of pharmacologically-relevant sizes were delivered to brain with a novel, multispectral approach. Results demonstrated that the device was able to safely open the BBB, and macromolecule delivery showed that both molecule size and FUS pressure both influence the amount and distribution of molecules in the brain. Using different ultrasound pressures, the threshold for BBB opening was found to be ≥ 180 kPa (0.13 MI). The threshold for damage was found to be ≥ 420 kPa (0.30 MI), and was minor at this pressure, but extensive for higher pressure (870 kPa, 0.62 MI), in which minor damage was caused by this pressure. Performing a novel implementation of a diffusion model on the fluorescence images of 500, 70, and 3 kDa dextran resulted in calculated diffusion coefficients of 0.032 ± 0.015, 12 ± 6.0, and 0.13 ± 0.094 square microns per second, respectively.