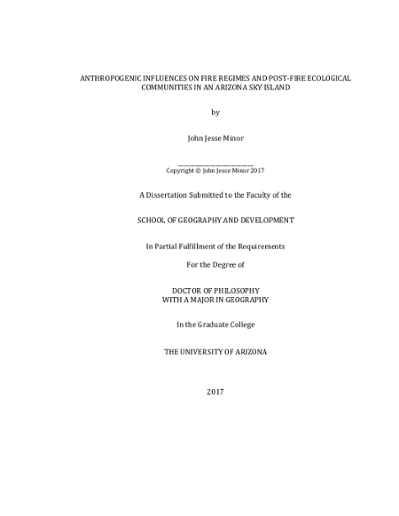 As an ecological disturbance agent, wildfire is highly responsive to spatial and temporal variables. At the landscape scale, the spatiotemporal characteristics of fire are influenced by climate, which is non-stable and subject to oscillations, and by weather, which affects the intensity of burning and the severity of fire effects over short time periods. Like wildfire, vegetation communities and fuels are similarly influenced and modified by climate and weather, which configure not only the type of burning possible at any given time, but also the fire effects produced by burning. Furthermore, ignition sources, both natural and anthropogenic, vary over space and time, whether they are from natural ignitions in response to weather and climate factors, and anthropogenic ignitions, which are much less constrained. Within a given physiographic setting, the spatiotemporal conditions of wildfire can be understood as fire regimes, which can be expressed in terms of typical fire frequency, season of burning, ignition source, duration, fire size, patch size, fire rotation, and return interval. As a dynamic assemblage, vegetation communities, combustible fuels, ignition sources, and fire regimes are arrayed over topographic features at landscape scales. Humans are able to affect various and multiple components of this dynamic assemblage. Humans have the most direct control over ignitions, both in terms of adding ignitions to the weather and climate-modulated background of natural ignitions, or by suppressing anthropogenic ignitions and suppressing fires that do start. Humans can also manipulate vegetation communities and fuel complexes, either promoting or diminishing the chance for fires to burn and spread. Humans have far less control over weather and climate, although the enhanced greenhouse effect is beginning to be expressed in terms of climate change and unusually extreme weather, including weather variables that drive fire growth and spread, including low humidity, high temperatures, and increased winds. The objectives of this dissertation were to: (1) investigate the influences of several waves of human occupation on temporal fire regime characteristics in the Chiricahua Mountains across major topographic settings and forest types, and to detect cessation of widespread, low-intensity wildfire in specific locations; (2) account for the mechanisms by which the U.S. state has managed fires by managing anthropogenic ignitions, which has contributed to long-term deviation in formerly frequent fire regimes; (3) examine the effects from the return of large and severe wildfire following decades of fire prevention and suppression by categorizing the ecological trajectories of montane forests following mixed-severity reburning; and (4) understand how the post-disturbance recovery of burned areas is influenced by the response of shrub species to variations in fire severity, with the post-fire regeneration strategies of shrub species driving differences in patch structure and total cover. Major findings and contributions of this research include identifying distinct anthropogenic influences on temporal fire regime characteristics in several forest types in an Arizona Sky Island, including shortened fire frequencies during times of conflict between Apaches and colonizing forces. We found that periods of conflict with Spanish and later American militaries exerted an influence on fire frequencies, with higher-elevation forests burning more frequently than pre-Apache periods or during episodes of peacetime. We also find that single-tree fires, which are likeliest to express anthropogenic ignitions, do not significantly correspond to multi-year patterns in climate (Appendix A). We found that the U.S. state used Smokey Bear and other wildfire prevention media as a pyropolitical instrument aimed at simultaneously managing people, landscapes, and flammable forests, in the process binding proper fire behavior to notions of citizenship, territory, and ecology. The wildfire prevention campaign, with Smokey Bear as its avatar, was successful because it remained flexible in the face of social, economic, and environmental change within the United States, but the ultimate result of this success is an environmental feedback loop by which fire prevention and suppression produce the need for ever-greater state response (Appendix B). We found that mixed-severity reburning has differential effects on various structural and demographic components of vegetation communities, with trees, shrubs, and regeneration responding differently according to plant functional traits. Although the effects of recent disturbance tend to overwrite prior disturbance, mixed severity fire produces different response in plant communities than single events. Repeated high and moderate severity fire suppress tree regeneration and shift the community to shrub dominance, with recovery in pine-oak vegetation types dominated by resprouting species and by resprouting species in mixed conifer. Unburned areas contain different vegetation communities, with pine-oak forests increasing the proportions of fire-intolerant species typical of mixed conifer, as well as oaks and other potentially shrubby species growing as trees (Appendix C). Finally, we found that the proportion of the landscape dominated by shrub cover and the structure of shrub patches is influenced strongly by fire severity, with high severity burns producing the largest shrub patches as well greater area:stem ratios. Unburned areas have the lowest amount of shrub cover, and shrub patches tend to be single-stemmed, indicating that sufficiently long fire-free periods can produce monopodial trees that would otherwise grow in shrub form. The effects of antecedent disturbance can be seen in shrub patch structure, suggesting that the organizing effects of fire can persist for decades (Appendix D). Together, this body of work underscores the means by which human activities interact with the natural world to produce historic fire regimes, and the ecological communities that arise following long periods of fire regime disruption.