Application of Industrial Wastewater Effluent in Growth of Algae -- Effects of Heavy Metals on the Growth Rate, Fatty Acid and Lipid Content of Chlorella Sorokiniana and Scenedesmus Obliquus 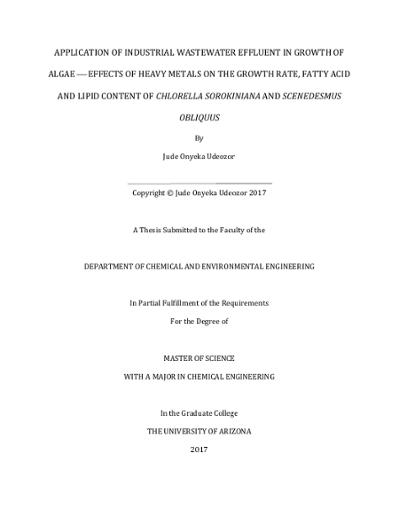 Growing interest in biofuel production from non-fossil fuel sources has resulted in several studies exploring different raw material sources as feedstock, including many algae species, for large-scale production of biofuel. Algae are promising feedstock due to advantages such as its short growth cycle, high biomass production, and lipid content. However, there are still challenges to overcome in order to use algae for commercial biofuel production. One of these challenges is the requirement for a large quantity of water and nutrients needed for growing large quantities of the algae. This work explores a potential solution to this challenge by studying the possibility of using industrial wastewater to grow algae for biofuel production. However, many industrial wastewaters, including effluents from semiconductor processing plants, are known to contain heavy metals that are toxic to humans and the environment. In this work, the effects of four of such metals ions, As(V), As(III), Ga(III), and In(III) on Chlorella sorokiniana and Scenedesmus obliquus strains were studied. In particular, the heavy metal toxicity on the strains, effects on its growth rate, biomass yield, lipid content and fatty acid methyl esters (FAME) were studied. Also, the effect of controlling pH on growth rate, biomass yield, lipid content, and FAME was studied for Chlorella sorokiniana in the presence of Ga(III). The results of the study confirmed the toxicity of these metals on both strains. However, Ga(III) and In(III) had the highest effect, while As(V) showed the least toxicity to the strains, with Chlorella sorokiniana withstanding concentrations of As(V) as high as 140mg/L. The heavy metals were slightly more toxic to Scenedesmus obliquus compared to Chlorella sorokiniana. In addition, the heavy metals reduced the growth rate of both strains. High percent changes in growth rate (more than 50%) were seen in cultures containing Ga(III) and In(III). Furthermore, concentration measurements with Inductively Coupled Plasma Optical Emission Spectrometer (ICP) before, during, and at the end of the growth period, showed that Scenedesmus obliquus adsorbed higher amounts of the heavy metals compared to Chlorella sorokiniana. Microalgae biosorption of heavy metals limits its end use, hence making Scenedesmus obliquus a less favorable option for this study, but may be a better choice for wastewater treatment applications. The effects of the four metals on the lipid content and FAME profile of Chlorella sorokiniana were studied. The result showed an increase in Chlorella sorokiniana lipid content in the presence of In(III), but a decrease in the presence of As(V) and As(III). The heavy metals had effects on the strain’s FAME compositions. The fatty acid composition included C16:0, C16:1, C16:2, C16:3, C18:0, C18:1, ω-6, C18:2, ω-6, and C18:3, ω-3 accounting for more than 97% of the total FAME composition. Furthermore, controlling the pH of the culture in the presence of Ga(III) at 6.5 led to higher adsorption of the heavy metal, increase in lipid content, but no significant change in FAME composition.