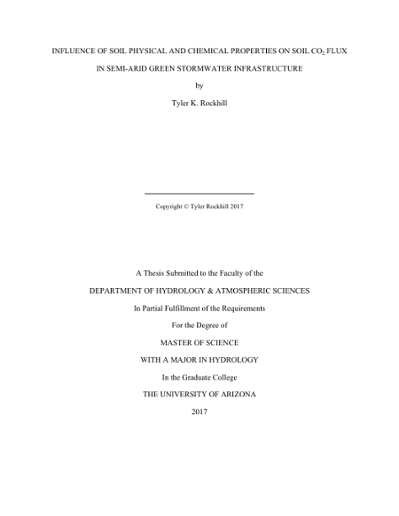 Rapid population growth and urbanization in semi-arid and arid regions has led to alterations in the water, carbon (C), and nitrogen (N) cycles (Gallo et al. 2014), prompting demands for mitigation strategies. Green Infrastructure (GI) is one of the methods used in urban storm water mitigation that delays and attenuates stormwater runoff by storing water in vegetated depressions. In the Southwest these depressions, also called bioswales, have the potential to act as biogeochemical hot spots, encouraging nutrient cycling, infiltration, plant growth, and microbial activity (McClain et al. 2003). An influx of water to GI initiates a combination of physical and microbial processes that result in increased CO2 efflux and N mineralization known as the Birch Effect (Birch, 1958). This study examines GI in Tucson, AZ through inducing an artificial precipitation regime and determining how soil properties, GI design, and biogeochemical characteristics influence the response. In natural systems it has been shown that soil moisture, soil properties, organic matter, length of dry period, nutrients such as carbon and nitrogen, and microbial biomass influence soil respiration and nitrogen mineralization (Borken and Matzner 2009). The purpose of this study is to determine the role that the Birch Effect plays in urban stormwater GI. Additionally we seek to determine how soil and nutrient properties and precipitation regime affect the amplitude of the response. It was found that soils from GI features tend to have higher concentrations of organic matter, total carbon, and total nitrogen, as well as higher water holding capacity and lower bulk density. It was also shown that soils originating from GI features tend to illicit a greater CO2 flux upon rewetting than soils from adjacent areas. The linear relationships found between % clay, pH, bulk density, WHC, SOM, TC, and TN suggest that the reason for the greater response to wetting is due to the altered physiochemical composition. The results of this study can be utilized to increase microbial activity and remediation in urban GI features. This fits into the larger goal of GI to help mitigate many of the issues associated with Urban Stream Syndrome (USS) such as flashier hydrography response, increased nutrient and contaminant concentrations, increased erosion, altered channel morphology and reduced biodiversity (Meyers et al. 2005).