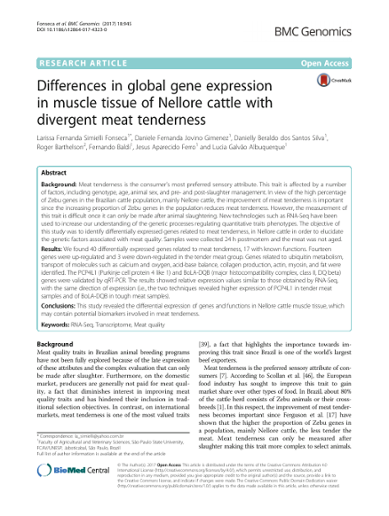 Background: Meat tenderness is the consumer's most preferred sensory attribute. This trait is affected by a number of factors, including genotype, age, animal sex, and pre-and post-slaughter management. In view of the high percentage of Zebu genes in the Brazilian cattle population, mainly Nellore cattle, the improvement of meat tenderness is important since the increasing proportion of Zebu genes in the population reduces meat tenderness. However, the measurement of this trait is difficult once it can only be made after animal slaughtering. New technologies such as RNA-Seq have been used to increase our understanding of the genetic processes regulating quantitative traits phenotypes. The objective of this study was to identify differentially expressed genes related to meat tenderness, in Nellore cattle in order to elucidate the genetic factors associated with meat quality. Samples were collected 24 h postmortem and the meat was not aged. Results: We found 40 differentially expressed genes related to meat tenderness, 17 with known functions. Fourteen genes were up-regulated and 3 were down-regulated in the tender meat group. Genes related to ubiquitin metabolism, transport of molecules such as calcium and oxygen, acid-base balance, collagen production, actin, myosin, and fat were identified. The PCP4L1 (Purkinje cell protein 4 like 1) and BoLA-DQB (major histocompatibility complex, class II, DQ beta) genes were validated by qRT-PCR. The results showed relative expression values similar to those obtained by RNA-Seq, with the same direction of expression (i.e., the two techniques revealed higher expression of PCP4L1 in tender meat samples and of BoLA-DQB in tough meat samples). Conclusions: This study revealed the differential expression of genes and functions in Nellore cattle muscle tissue, which may contain potential biomarkers involved in meat tenderness.