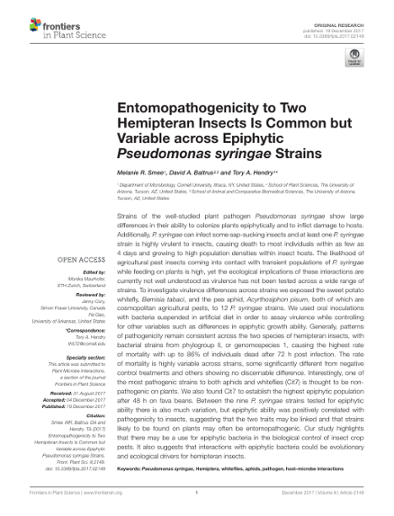 © 2017 Smee, Baltrus and Hendry. This is an open-access article distributed under the terms of the Creative Commons Attribution License (CC BY).

Strains of the well-studied plant pathogen Pseudomonas syringae show large differences in their ability to colonize plants epiphytically and to inflict damage to hosts. Additionally, P. syringae can infect some sap-sucking insects and at least one P. syringae strain is highly virulent to insects, causing death to most individuals within as few as 4 days and growing to high population densities within insect hosts. The likelihood of agricultural pest insects coming into contact with transient populations of P. syringae while feeding on plants is high, yet the ecological implications of these interactions are currently not well understood as virulence has not been tested across a wide range of strains. To investigate virulence differences across strains we exposed the sweet potato whitefly, Bemisia tabaci, and the pea aphid, Acyrthosiphon pisum, both of which are cosmopolitan agricultural pests, to 12 P. syringae strains. We used oral inoculations with bacteria suspended in artificial diet in order to assay virulence while controlling for other variables such as differences in epiphytic growth ability. Generally, patterns of pathogenicity remain consistent across the two species of hemipteran insects, with bacterial strains from phylogroup II, or genomospecies 1, causing the highest rate of mortality with up to 86% of individuals dead after 72 h post infection. The rate of mortality is highly variable across strains, some significantly different from negative control treatments and others showing no discernable difference. Interestingly, one of the most pathogenic strains to both aphids and whiteflies (Cit7) is thought to be nonpathogenic on plants. We also found Cit7 to establish the highest epiphytic population after 48 h on fava beans. Between the nine P. syringae strains tested for epiphytic ability there is also much variation, but epiphytic ability was positively correlated with pathogenicity to insects, suggesting that the two traits may be linked and that strains likely to be found on plants may often be entomopathogenic. Our study highlights that there may be a use for epiphytic bacteria in the biological control of insect crop pests. It also suggests that interactions with epiphytic bacteria could be evolutionary and ecological drivers for hemipteran insects.

Except where otherwise noted, this item's license is described as © 2017 Smee, Baltrus and Hendry. This is an open-access article distributed under the terms of the Creative Commons Attribution License (CC BY).