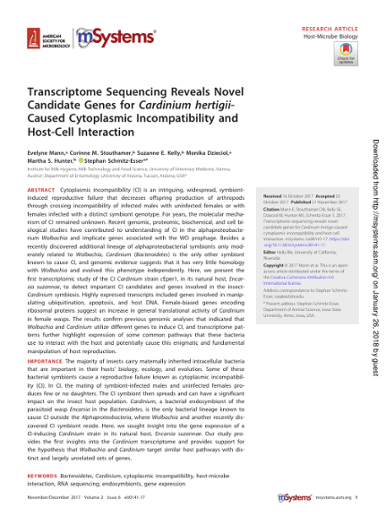 Copyright © 2017 Mann et al. This is an open-access article distributed under the terms of the Creative Commons Attribution 4.0 International license.

Cytoplasmic incompatibility (CI) is an intriguing, widespread, symbiont-induced reproductive failure that decreases offspring production of arthropods through crossing incompatibility of infected males with uninfected females or with females infected with a distinct symbiont genotype. For years, the molecular mechanism of CI remained unknown. Recent genomic, proteomic, biochemical, and cell biological studies have contributed to understanding of CI in the alphaproteobacterium Wolbachia and implicate genes associated with the WO prophage. Besides a recently discovered additional lineage of alphaproteobacterial symbionts only moderately related to Wolbachia, Cardinium (Bacteroidetes) is the only other symbiont known to cause CI, and genomic evidence suggests that it has very little homology with Wolbachia and evolved this phenotype independently. Here, we present the first transcriptomic study of the CI Cardinium strain cEper1, in its natural host, Encarsia suzannae, to detect important CI candidates and genes involved in the insect-Cardinium symbiosis. Highly expressed transcripts included genes involved in manipulating ubiquitination, apoptosis, and host DNA. Female-biased genes encoding ribosomal proteins suggest an increase in general translational activity of Cardinium in female wasps. The results confirm previous genomic analyses that indicated that Wolbachia and Cardinium utilize different genes to induce CI, and transcriptome patterns further highlight expression of some common pathways that these bacteria use to interact with the host and potentially cause this enigmatic and fundamental manipulation of host reproduction. IMPORTANCE The majority of insects carry maternally inherited intracellular bacteria that are important in their hosts' biology, ecology, and evolution. Some of these bacterial symbionts cause a reproductive failure known as cytoplasmic incompatibility (CI). In CI, the mating of symbiont-infected males and uninfected females produces few or no daughters. The CI symbiont then spreads and can have a significant impact on the insect host population. Cardinium, a bacterial endosymbiont of the parasitoid wasp Encarsia in the Bacteroidetes, is the only bacterial lineage known to cause CI outside the Alphaproteobacteria, where Wolbachia and another recently discovered CI symbiont reside. Here, we sought insight into the gene expression of a CI-inducing Cardinium strain in its natural host, Encarsia suzannae. Our study provides the first insights into the Cardinium transcriptome and provides support for the hypothesis that Wolbachia and Cardinium target similar host pathways with distinct and largely unrelated sets of genes.

Except where otherwise noted, this item's license is described as Copyright © 2017 Mann et al. This is an open-access article distributed under the terms of the Creative Commons Attribution 4.0 International license.