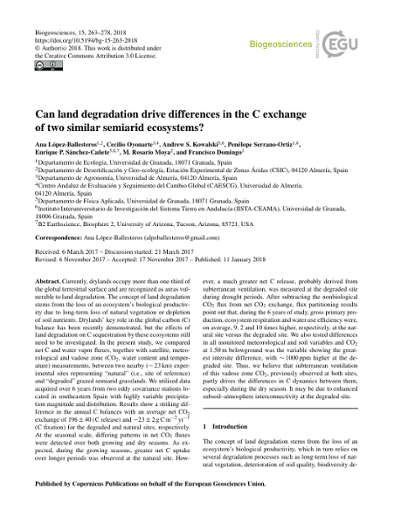 © Author(s) 2018. This work is distributed under the Creative Commons Attribution 3.0 License.

Currently, drylands occupy more than one-third of the global terrestrial surface and are recognized as areas vulnerable to land degradation. The concept of land degradation stems from the loss of an ecosystem's biological productivity due to long-term loss of natural vegetation or depletion of soil nutrients. Drylands' key role in the global carbon (C) balance has been recently demonstrated, but the effects of land degradation on C sequestration by these ecosystems still need to be investigated. In the present study, we compared net C and water vapor fluxes, together with satellite, meteorological and vadose zone (CO2, water content and temperature) measurements, between two nearby (similar to 23 km) experimental sites representing "natural" (i.e., site of reference) and "degraded" grazed semiarid grasslands. We utilized data acquired over 6 years from two eddy covariance stations located in southeastern Spain with highly variable precipitation magnitude and distribution. Results show a striking difference in the annual C balances with an average net CO2 exchange of 196 +/- 40 (C release) and 23 +/- 2 gCm(-2) yr(-1) (C fixation) for the degraded and natural sites, respectively. At the seasonal scale, differing patterns in net CO2 fluxes were detected over both growing and dry seasons. As expected, during the growing seasons, greater net C uptake over longer periods was observed at the natural site. However, a much greater net C release, probably derived from subterranean ventilation, was measured at the degraded site during drought periods. After subtracting the nonbiological CO2 flux from net CO2 exchange, flux partitioning results point out that, during the 6 years of study, gross primary production, ecosystem respiration and water use efficiency were, on average, 9, 2 and 10 times higher, respectively, at the natural site versus the degraded site. We also tested differences in all monitored meteorological and soil variables and CO2 at 1.50m belowground was the variable showing the greatest intersite difference, with similar to 1000 ppm higher at the degraded site. Thus, we believe that subterranean ventilation of this vadose zone CO2, previously observed at both sites, partly drives the differences in C dynamics between them, especially during the dry season. It may be due to enhanced subsoil-atmosphere interconnectivity at the degraded site.