Association Between Decline in Slow Vital Capacity and Respiratory Insufficiency, Use of Assisted Ventilation, Tracheostomy, or Death in Patients With Amyotrophic Lateral Sclerosis 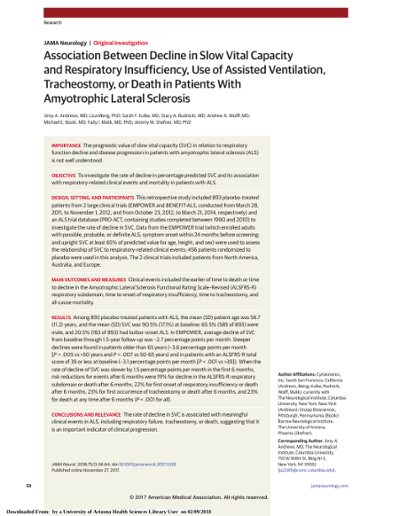 Association Between Decline in Slow Vital Capacity and Respiratory Insufficiency, Use of Assisted Ventilation, Tracheostomy, or Death in Patients With Amyotrophic Lateral Sclerosis 2018, 75 (1):58 JAMA Neurology

IMPORTANCE The prognostic value of slow vital capacity (SVC) in relation to respiratory function decline and disease progression in patients with amyotrophic lateral sclerosis (ALS) is not well understood. OBJECTIVE To investigate the rate of decline in percentage predicted SVC and its association with respiratory-related clinical events and mortality in patients with ALS. DESIGN, SETTING, AND PARTICIPANTS This retrospective study included 893 placebo-treated patients from 2 large clinical trials (EMPOWER and BENEFIT-ALS, conducted from March 28, 2011, to November 1, 2012, and from October 23, 2012, to March 21, 2014, respectively) and an ALS trial database (PRO-ACT, containing studies completed between 1990 and 2010) to investigate the rate of decline in SVC. Data from the EMPOWER trial (which enrolled adults with possible, probable, or definite ALS; symptom onset within 24 months before screening; and upright SVC at least 65% of predicted value for age, height, and sex) were used to assess the relationship of SVC to respiratory-related clinical events; 456 patients randomized to placebo were used in this analysis. The 2 clinical trials included patients from North America, Australia, and Europe. MAIN OUTCOMES AND MEASURES Clinical events included the earlier of time to death or time to decline in the Amyotrophic Lateral Sclerosis Functional Rating Scale-Revised (ALSFRS-R) respiratory subdomain, time to onset of respiratory insufficiency, time to tracheostomy, and all-cause mortality. RESULTS Among 893 placebo-treated patients with ALS, the mean (SD) patient age was 56.7 (11.2) years, and the mean (SD) SVC was 90.5%(17.1%) at baseline; 65.5%(585 of 893) were male, and 20.5%(183 of 893) had bulbar-onset ALS. In EMPOWER, average decline of SVC from baseline through 1.5-year follow-up was - 2.7 percentage points per month. Steeper declines were found in patients older than 65 years (-3.6 percentage points per month [P=.005 vs < 50 years and P=.007 vs 50-65 years) and in patients with an ALSFRS-R total score of 39 or less at baseline (-3.1 percentage points per month [P<.001 vs >39]). When the rate of decline of SVC was slower by 1.5 percentage points per month in the first 6 months, risk reductions for events after 6 months were 19% for decline in the ALSFRS-R respiratory subdomain or death after 6 months, 22% for first onset of respiratory insufficiency or death after 6 months, 23% for first occurrence of tracheostomy or death after 6 months, and 23% for death at any time after 6 months (P<.001 for all). CONCLUSIONS AND RELEVANCE The rate of decline in SVC is associated with meaningful clinical events in ALS, including respiratory failure, tracheostomy, or death, suggesting that it is an important indicator of clinical progression.